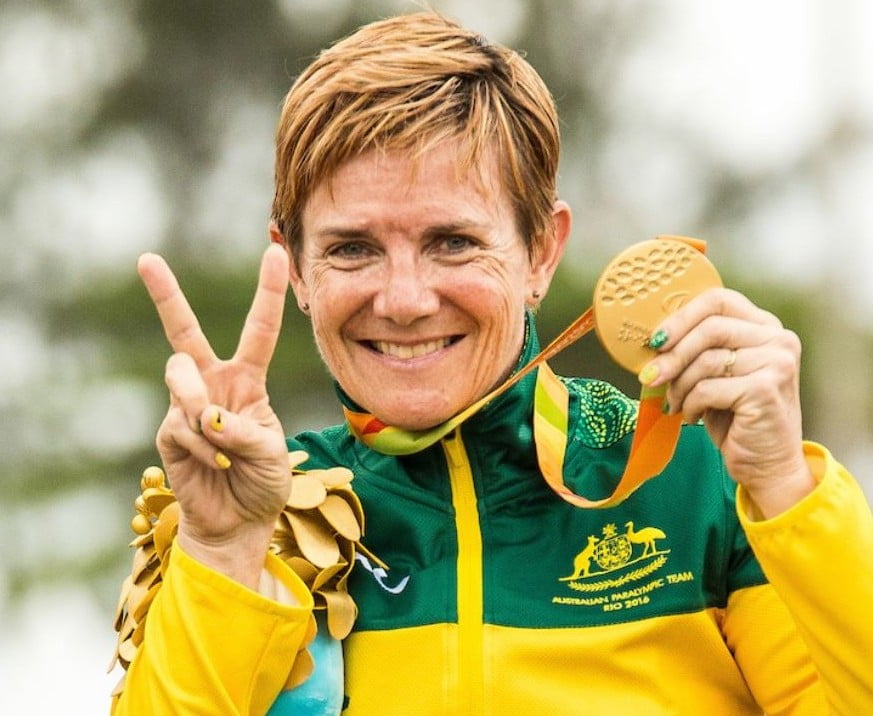 Carol Cooke won the time trial gold two days ago and today she delivered the double adding the road race crown to her medal haul at the Paralympic Games in Rio.

The 55 year old Victorian who has overcome her ‘toughest campaign ever’ crossed the finish line 17 seconds clear of reigning world champion Jill Walsh of the United States with Germany’s Jana Majunke a further 11 seconds back in third place.

“I think crossing the line today was sheer relief that the plan worked,” said an overjoyed Cooke. “It was relief and sheer joy like ‘Wow I’ve got two golds!

“I don’t think it’ll sink in until tomorrow.”

The 30 kilometre race was contested over two 15 kilometre laps out and back from the beachside town of Pontal on the outskirts of Rio and Cooke went in with a plan to improve on her silver medal from the world titles.

“I went in with a plan which I’ve never done before and the plan was to sit back and see what everybody was doing especially for the first lap and stay back until the first half of the second lap,” said Cooke. “It had been decided between the coaches and I that I would put my head down for 20 or 30 seconds and go as hard as I could possibly go and then look back to see if anyone had come with me.”

The approach was unusual for Cooke who is normally drives the pace during the race but today played a waiting game and picked her moment to pounce.

“I think I shocked everybody because they were yelling at me to take a turn on the front anyway so I thought okay go,” said Cooke who launched her attack five kilometres from the finish.  “I went for my 30 seconds and I thought my lungs were going to explode but I looked back and the only one I could see was the American and I knew that I had a big enough buffer to time trial the last five kilometres.

“As it turned out I was sitting behind Jill Walsh from the States and she beat me last year at world champs and I saw her change gear and I thought she’s about to jump and I thought I’m going to get ahead of her.

“The German girl was snaking from side to side in the front and as she went right I went ‘Boom’ and took off.”

Cooke had also put her speed to use in the early stages of the race to chase down an early attack by Majunke.

“Nobody was going after her and I thought she’d get out too far so I took off and caught up to her that put everybody behind me,” said Cooke who put in another burst of speed to thin out the ranks of rivals. “I then wanted to get off the front and of course no-one wanted to take the front so I hit the brakes and they had to go round me because I stopped and then I jumped into the mix and stayed in the mix for most of the race.”

Cooke, a former Canadian undercover police officer who moved to Australia in 1994, was diagnosed with multiple sclerosis (MS) four years later. Her MS symptoms are aggravated by heat and exertion making it a challenge to manage during competition.

“It’s actually been tough this time, probably been the toughest it’s ever been,” said Cooke whose T1-2 class ride tricycles in competition.. “The night after the time trial I slept about an hour and a half and the neuro pain was really bad because I was so tired.

“I felt like I had ants crawling all over my face with the pins and needles and my legs were twitching everywhere and the pain was ridiculous,” she explained. “So you do what you can, I had an ice bath, I had a massage.”

“Unfortunately when I got up this morning my balance was completely gone,” said Cooke who also has tinitis. “I thought at least I don’t have to put my head down and I’m on three wheels so I can’t fall over even if my head does spin but you don’t think about that when you cross the line.”

C2 class Reid was a silver medallist on the track in the 500 metre time trial and was well off the pace today over the road distance crossing more than eight minutes behind the winner, American Jamie Whitmore. But the 19 year old was thrilled to finish her first road race.

Kennedy (C3) was also happy with how she rode after the disappointment of pulling her foot and missing the medals in her target event, the individual pursuit on the track.

“It’s definitely been up and down,” said the 22 year old of her Rio campaign.  “It was pretty hard but you’ve got to remember life goes on and there is nothing I could do about it.

“It wasn’t my fault and I just had to focus on the next event because I knew I had three more events to compete in and I had to concentrate on that.

“I’m happy with how I went and today extremely happy because to be thirty-five seconds behind the winner is the closest I ever came to the American girl in the C3 class,” said Kennedy. “Best international race of my career so far.”

David Nicholas was the other Australian in action today. The 24 year old placed sixth in the 71 kilometre C1-2-3 men’s event won by Steffen Warias of Germany ahead of Belgian Kris Bosmans and Italian Fabio Anobile.

Nicholas finished 2:37 behind the winner but ends his Rio campaign with a gold medal from the track where he won the C3 Individual Pursuit.