To celebrate Rio 2016, Woolworths and the Royal Australian Mint have launched a series of limited edition Australian Olympic and Paralympic $2 coins, and the only way to strike gold is by shopping at Woolies. 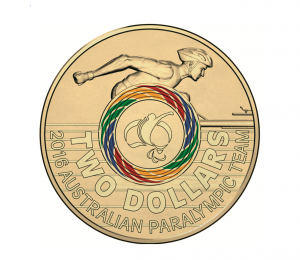 From today, one of 12 million Rio 2016 commemorative $2 coins to be released over the next month could make it from the Woolworths checkout to your pocket. The coins will be released exclusively through Woolworths and customers could find one in their change at the checkout.

The collection includes five Australian Olympic coins, each designed to showcase one of the Olympic Rings, and one Australian Paralympic coin, Australia’s first ever multi-coloured $2 coin.

The new-look series is a symbol of support for all Australian athletes. The Australian Olympic coin incorporates motifs spanning 32 sporting disciplines and the coloured ring on the Paralympic coin is representative of the Aussie team’s colours.

Karen Madden, Head of Media & Sponsorship for Woolworths Supermarkets, said; “Woolworths is proud to support our 2016 Olympic and Paralympic Teams. We are excited to be able to share this with our customers through these limited edition coins in partnership with the Royal Australian Mint. It is a great privilege to be a part of the 2016 Australian Olympic and Paralympic effort and we are very much looking forward to distributing these coins in change to our customers when they shop with us.”

CEO of the Royal Australian Mint, Ross MacDiarmid, said; “We have worked closely with Woolworths to help celebrate our Aussie athletes with this set of commemorative coins. We have used world-class technology to develop Australia’s first multi-coloured $2 coin, a pivotal moment for us to help honour a major event in culture and history. There is so much passion for what we do here, and we are excited to see them in Woolworths stores for Aussie consumers to enjoy.”

By Woolworths and the Royal Australian Mint