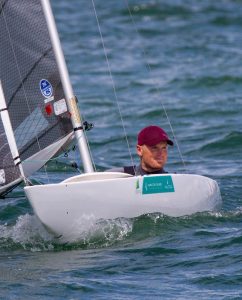 The ever-changing Hyeres conditions provided our sailors with another range of conditions today to test their skills in one of the last major regattas leading into the Rio Olympic and Paralympic events later this year. A lack of breeze early in the day saw racing postponed for two-three hours, then racing got underway in light, unsteady conditions before the heavier mistral conditions came in, eventually dying out late in the afternoon.

Australia’s Matt Bugg revelled in the conditions, as he has done throughout this regatta, leading from start to finish in the International 2.4mR class.

At the conclusion of his regatta, Bugg commented “I started the event with a win on day one, and managed to stay on top of the leader board for the rest of the week. We had a mix of conditions – we had light air and heavy air. I think it was a good test of an all-round sailor this week.

“Rio is what I have been working for, for the last four years. To come out and start my European season with a win, will give me confidence leading into my next major regatta, which is the World Championships and ultimately the really important one, the Paralympic Games this September.”

Australia’s other Paralympic crew competing at this event, the Sonar crew of Colin Harrison, Jonathan Harris and Russell Boaden, finished today’s races with a 5 & 7, with an overall result of fourth.

“It was a tough day on the water today,” said Harrison, “with quite a shifty breeze, but very close racing within our fleet, as always. We haven’t been off the podium since London 2012, so this is a good opportunity to look at the little things that we just need to tidy up a bit.