‘Momentum’ is the key word emerging from the Australian Wheelchair Rugby Team camp after the Steelers fought their way to victory overnight in the Four Nations tournament decider in Chiba, Japan. 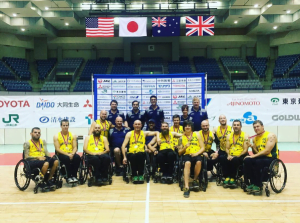 The Steelers defeated Great Britain 57-49 in the final, to take bragging rights from the tournament boasting four of the world’s top five nations . The United States finished third ahead of hosts Japan.

Now with just the Canada Cup (June 24-26) left to play to complete their international preparations before Rio 2016, Australian coach Brad Dubberley believes the Steelers are right where they want to be.

“That was a really tough tournament. It mentally and physically drained us all, but it was great to get the result,” Dubberley said.

“We’re really gathering momentum now for the Canada Cup and the Paralympics. It’s a huge result here to send a message to the rest of the world.”

With teams playing each other twice during the qualifying rounds, Australia dropped just one match to Great Britain on day one (52-51) to emerge as the top qualifier.

It set up a shot at redemption for the Aussies, as the Brtis (4-2) also fought their way through and entered the final determined to upset the birthday celebrations of Australian star Ryley Batt.

But Batt made his 27th birthday one to remember as he lead to Steelers to a 28-24 half-time lead, before dominating the second half to secure an emphatic eight-goal victory.

To put the icing on the cake, Batt was named the tournament’s Most Valuable Player.

“We have progressed so much since the Rio test event [in March],” Dubberley said.

“This whole tournament has been really important for us in our preparations for Rio and it’s great to come away with the win, too.”

The Australian Steelers are the reigning Paralympic and world wheelchair rugby champions.