The design was highly acclaimed by the public and the Tokyo 2020 Emblems Selection Committee for exemplifying Japan and the city of Tokyo, and for its representation of the spirit of the Tokyo 2020 vision. 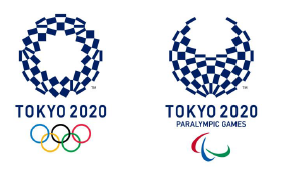 Chequered patterns have been popular in many countries around the world throughout history. In Japan, the chequered pattern became formally known as “ichimatsu moyo” in the Edo period (1603-1867) and this chequered design in the traditional Japanese colour of indigo blue expresses a refined elegance and sophistication that exemplifies Japan. Composed of three varieties of rectangular shapes, the design represents different countries, cultures and ways of thinking. It incorporates the message of “Unity in Diversity.” It also conveys the fact that the Olympic and Paralympic Games seek to promote diversity as a platform to connect the world.

The design was selected following an open competition – the first ever in the Olympic and Paralympic history – which has actively engaged the public over the past seven months.

Ryohei Miyata, Chair of the Tokyo 2020 Emblems Selection Committee, commented, “Since September last year, it has been a great honour and privilege to chair the Tokyo 2020 Emblems Selection Committee, and to work with my fellow committee members. I am extremely grateful to all members of the committee for their outstanding efforts over the past seven months. From today, these emblems will serve as the face of the Tokyo 2020 Olympic and Paralympic Games. I very much hope that the emblems will prove popular with people everywhere, and we look forward to your continued support towards the Tokyo 2020 Games.”
Asao Tokolo, and the three runners-up – Kozue Kuno (Design B), Takaaki Goto (Design C), Chie Fujii (Design D) – all received an award during a ceremony held in Tokyo today. Born in 1969, Asao Tokolo lives in Tokyo. He graduated in Architecture from Tokyo Zokei University, and is currently active as an artist. His works have been featured in several exhibitions in Japan.
The ceremony was attended by John Coates, IOC Vice President and Chair of the IOC Coordination Commission for Tokyo 2020; Alex Gilady, IOC member and Vice-Chair of IOC Coordination Commission for Tokyo 2020; Miguel Sagarra, IPC Governing Board member; Yoichi Masuzoe, Governor of Tokyo; Tsunekazu Takeda, IOC Member and Japanese Olympic Committee President; Mitsunori Torihara, Japanese Paralympic Committee Chairman of the Board; and Yoshiro Mori, Tokyo 2020 President.
John Coates commented, “The new Olympic Games Tokyo 2020 emblem symbolizes important elements of the Tokyo 2020 Games vision and the underlying concepts of achieving personal best, unity in diversity and connecting to tomorrow. I congratulate the Tokyo 2020 team for the inclusive process that led to this selection. The public engagement in the selection process is another sign of growing interest in the 2020 Games. Interest and excitement will continue to build, in Japan and globally, after the official handoff to Tokyo 2020 at the close of the upcoming Olympic Games Rio 2016. The Tokyo 2020 emblem will become a familiar symbol to people around the world.”

Miguel Sagarra said, “I would like to congratulate the Tokyo 2020 Organising Committee on the launch of this Paralympic emblem which, over the coming years, will become synonymous with high performance sport and promoting societal change. I would like to thank the 14,599 people who originally submitted designs, the Japanese public for sharing their opinions on the final shortlist of four and the Tokyo 2020 Emblems Selection Committee for their efforts in selecting the final Olympic and Paralympic emblems. The Tokyo 2020 Paralympic Games emblem is something that will be fully embraced, not just by the people of Japan and Asia, but by citizens around the world. The Paralympic Games are the world’s number one sporting event for driving social inclusion and this emblem not only conveys the qualities and traditions of Japan but the excellence of the Para athletes we can expect to see competing in Tokyo in four years’ time.”
Yoshiro Mori said, “It is my most earnest wish that the winning emblems, which have been selected from among almost 15,000 design entries, will receive wide acclaim as the symbols of the Tokyo 2020 Olympic and Paralympic Games.”