Australia’s Legs, Trunk and Arms Mixed Coxed Four achieved history last night in Italy when they secured victory in the Final Paralympic Qualification Regatta and in turn qualified the boat class for the 2016 Paralympic Games, the first time Australia has been represented in this boat class at the Games. 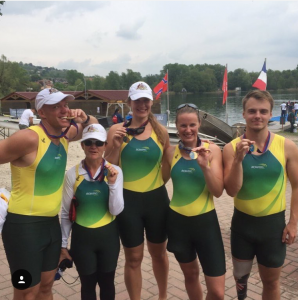 In great conditions in Gavirate, Italy with a very slight tail breeze, the crew got out to a good start and was in front by the 500 metre mark and the pressure on the other crews to make their move. Mosman RC’s Burnand urged her crew to start their run for the line early and, with China hot on their heels, Australia crossed the line first, by half a second, to book a spot in Rio de Janeiro, much to the delight of the cheering Australians in the crowd, including the AIS European Training Centre staff and the Australian Men’s Volleyball Team.

Post-race, Jeremy McGrath, from Balmain Rowing Club in New South Wales said: “From taking part in the LTA Mixed Double Sculls in 2014, it has been fantastic to have been involved in the development of the LTA category and qualifying the LTAMix4+ for the 2016 Rio Paralympic Games. It makes it even more special that this is the first time Australia has qualified this boat for the Paralympic Games.”

Kate Murdoch, who trains out of Nepean Rowing Club, echoed McGrath’s sentiment on the excitement of qualifying the boat: “It’s the first time Australia has qualified this boat for the Paralympic Games and it has been a massive team effort during the last Paralympic cycle. The support from Rowing Australia, the State Institutes and Academies of Sport, State Associations, coaches, clubs, friends, family and other athletes have really ensured this sport class has grown.”

General Manager of Sport, Jaime Fernandez said: “It’s fantastic to have qualified a third boat for the Australian Paralympic Team. This is the first time Australia will have an LTA Mixed Coxed Four competing at the Games and I would like to congratulate all involved in helping Australia to qualify this boat.

“The athletes are of course to be congratulated first and foremost, while I would also like to thank Gordon Marcks and Tara Huntly in Rowing Australia’s para-rowing department for their hard work along with the support and efforts of the States and Clubs across the country that have made us the current number one para-rowing nation in the world.”

In addition to winning the Final Paralympic Qualification Regatta, the crew then backed up a hard a morning of racing by winning the International Para-Rowing Regatta held on the same day in Gavirate, Italy. The Australian crew took on some crews who had qualified for the 2016 Paralympic Games at last year’s 2015 World Rowing Championships and paced themselves through the race knowing the competition would be strong.

In a slight cross-tail wind, the crew came out of the starting blocks in fourth but chipped their way through the field to hit the lead at the 400 metre mark and finish powerfully and in first place, followed by South Africa and Ukraine (both of whom qualified for Rio in 2015).

Post-race, Brock Ingram, who trains at West Australian Rowing Club alongside Davinia Lefroy, commented: “After being pushed by the Chinese in the first race [the qualification regatta], it was always going to be hard to back up. I am really proud of the crew who dug deep and got the job done.”

McGrath added: “For this race, I had a lot of redemption because having raced these crews in 2015 [when Australia didn’t manage to qualify the boat], I was eager to race them in this new combination and show them what we could do.”

Senior Para-Rowing Coach Gordon Marcks commented: “We’re delighted to see this crew come through to win not just one final this weekend but two. The crew have worked hard and it’s fantastic to see such progression from the category over the last few years. I’m looking forward to seeing how all our categories perform on the global stage at the upcoming Paralympic Games.”