Canberra’s Sue Powell heads in to the 2016 UCI Para-cycling Track World Championships in Montichiari as the reigning Paralympic and World Champion in the women’s C4 individual pursuit. 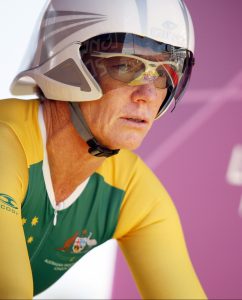 Powell hopes the return to Montichiari, the location of her first track world title in 2011, will bring even more success in the individual pursuit – an event she has come to claim as her own over the past five years with three-world championships gold and one silver, plus Paralympic gold in 2012 and a world record.

The last three months has seen Powell combine her talent across the track and road to claim gold in the 500m time trial and individual pursuit at the 2016 Cycling Australia Para-Cycling Track National Championships in December.  She also added a third 2016 National title in the road time trial in February.

“My preparation has really been focused on the track IP but that transfers well to the road time trial,” explained Powell on her recent success in the time trial at the road national championships in Adelaide. “I had a very good preparation in Canberra over the summer both on the bike and also in the gym prior to road nationals.

“We went to a team camp in Adelaide where I have had some great sessions on the track and now in Italy all the hard work is coming together towards race day.”

With the 2016 Paralympic Games in Rio fast approaching, Powell is fortunate to have been through the process four years ago as she chases selection for her second Games.

“The Paralympics in 2012 was a really intense experience with the pressure and level of competition beyond anything I had experienced before.

“We had a great support team through the Australian Paralympic Committee, Cycling Australia and State based Institutes.

“Learning to deal with that level of competition and experiencing a number of world championships since London I know I have matured as an athlete although the nerves still kick in as we get closer to race day.”

But for Powell, her goals are not just related around medals but producing the best performance on the day.

“My goals are always focused on my performance and looking for personal best times. That is what keeps me motivated and committed.

“If I can come away from this world championship with a sea-level PB I would be very happy. Of course I would love to better my world record from Mexico (at altitude) but that could be tough.”

The Para-cycling Track World Championships are the last major competition on the track ahead of Rio and having been here four years ago Powell knows the importance not just for herself but also for the entire Australian team around qualifying quotas for the Rio Paralympic Games.

“Worlds does take on extra importance in a Paralympic year.

“Not only is it the last chance to put in performances towards selection for Rio, there are also critical points out of this world championships which decide how many athletes Australia can take to Rio.”

About the Championships
The 2016 UCI Para-cycling Track World Championships will be held at Velodrome Fassa Bortolo velodrome in Montichiari, Italy, from 17-20 March. Official Website

31 events will be decided across four days of competition across individual pursuit, time trial, scratch race, sprint and team sprint.