Martin on the road to Rio

Scone-based competitor Lisa Martin will be aiming to secure a final Rio Paralympic qualifying score when she competes at the 2016 Sydney CDI***. 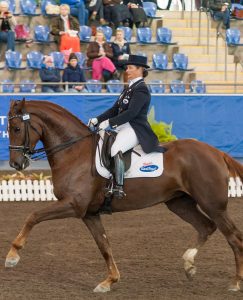 It’s the first time Lisa has attempted to qualify for an Australian Paralympic team, having been assessed as suitable for Grade Four competition earlier this year.

Lisa suffered a horrific injury 16 years ago when she fell from a young horse, resulting in her tibia crushing into the bottom of her foot. Six weeks after the original injury and after operations to insert steel supports, Lisa slipped and fell, damaging her leg again.

“The doctors said they didn’t know if they could save the leg,” she said.

Fortunately after several more procedures, her leg was saved however her Achilles tendon “does not work at all”, and she has less than 15 per cent use of the joint.

Lisa has never let the injury stop her, and has been competing with much success against able-bodied competitors ever since. Indeed, when it was first suggested she try out as a Para-Rider in 2007, Lisa admitted she “didn’t understand the concept”.

“I thought, ‘I’m not in a wheelchair’,” she said. “But when I was approached and told, ‘you have had this injury, you would be a Grade Four, would you consider being assessed’, I decided to do it.”

Lisa was assessed at Boneo CDI earlier this year and gained one crucial qualifying score for Rio. She will have her last chance to gain the second score at this year’s Sydney CDI***, one of the most prestigious dressage competitions in the country that runs at the Sydney 2000 Olympics venue at Horsley Park from April 6 to 9.

Competing on her wonderful mare, First Famous, Lisa said making the Paralympic team was a “dream”.

“Looking at the Grade Four riders in Europe and overseas, I am just amazed,” she said. “I was blown away, I could not believe the quality of the horses and riders that were competing.

“The whole dream is to get onto the team for Rio, and what I will do after Rio is travel to Germany and Florida to train.”

The Sydney CDI*** attracts Australia’s top riders to compete for more than $40,000 in prize money, and will see judges travel from around the world to officiate. It is the last chance Australian competitors will have to qualify for the Rio Olympics and Paralympics, and features a special Saturday night spectacular of showjumping and the ever-popular dressage Grand Prix Freestyle to music.

The event will also include a huge trade and shopping village, first class entertainment and viewing at the Top Spot Marquee for premium ticket holders, merchandise, school and club educational tours, food and bar area.

For more information, go to www.sydneycdi.com