After five wins and one loss, the Australian wheelchair rugby team has finished the Aquece Rio International test event in second place. 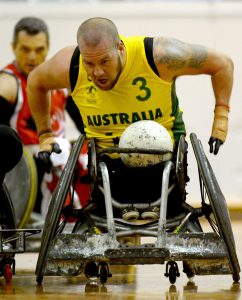 Despite ultimately losing the top spot to world number five team, Great Britain, Australian head coach Brad Dubberley says he is confident in the team’s ability to deliver the results needed to win their second consecutive Paralympic gold in September.

“There are lots of learnings, lots of things for us to tidy up, but importantly, going to Rio for this tournament has set us up well for the Paralympics in a few months.”

While the Australian side lost in their first game against Great Britain 49-57, Dubberley said he was pleased to see the Steelers come back with a strong win against world number one Canada 60-52 in their second match.

“It was a competitive game, but then we started to flag. We were a bit flustered and stressed come half time. They settled down really well and it was good to see the team take out a win against the team in their second match.”

“We can sometimes come out against those bottom ranked teams and not perform very well, but the Steelers came out against Brazil and played really well.

Adding to Smith’s comments, Dubberley said of the whole tournament: “we’re a much better team from what we played, so if we come out at each game the way we should and the way we can, then that should give us better results come Rio.”

Having two consecutive tournament losses at the World Wheelchair Rugby Challenge and the Asia-Oceania Championships last year, the Steelers dropped from the world number one ranking to number four, so despite not coming out on top, both coaches are pleased with the end result.

“It was good to get that progression from a horrible first game, through to winning the next four Games. It gave the boys a lot of confidence,” said Smith.

Dubberley said the Steelers have a good idea of what needs to be done to ensure they win their second consecutive Paralympic gold.

“It was great to get on the medal dias and finish second here, but there’s lots of stuff to tidy up before the Games.

“The next time we come here in just a few months time, it means business. We need to get the job done.”

The Steelers will now fly home to prepare for the Japan Para Games in May and the Canada Cup in June, where the team will hope to secure more wins to land them in good stead ahead of September’s Paralympic Games.