Australia has a proud history in Para-Alpine Skiing that is set to continue with medal aspirations for the next Winter Paralympic Games in 2018. 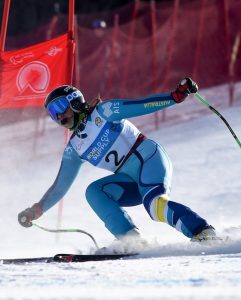 Leading the charge this Northern Winter is Mitch Gourley, a veteran of two Winter Paralympic Games and four World Championships who still feels like he has a lot to learn and achieve as a Para-Alpine skier.

“My skiing and my approach to being an athlete has changed a lot over the past 10 years,” said Gourley, who was born a congenital amputee, with his left forearm ending a few inches below his elbow.

“I started out being a little bit crazy, going really hard and skiing way beyond my abilities. This got me a few surprise results in my first couple of years on the World Cup circuit, but eventually my technical deficiencies caught up with me and I was forced to take a step back and address them in order to keep improving.”

Gourley has spent the past couple of years focusing on the basics, to become a better skier even if it first came at the expense of some speed and results.

“I really feel like things are starting to fall into place now and I’m in a much more solid position to focus on going fast again,” the 24-year-old from Geelong said.

“Last year’s World Championships were tough for me with three very near misses, however I feel like I’ve had a really good summer in the gym and on the hill and am ready to get back on the World Cup podium regularly and fight for the Giant Slalom globe and the Overall again. Those are the big goals for this World Cup season.”

Gourley’s strongest discipline has been the Giant Slalom and one of his goals is to become a more consistent performer at World Cup level in the speed disciplines.

Gourley’s first chance to prove himself on the World Cup circuit this Northern Winter season will be at Abtenau, Austria from 15 January. He will then head to Italy, Switzerland, France and finally the USA.

For Gourley, the season will show him if his hard work at perfecting his technique has paid off and give him a good gauge of his performance with two years to go until the next Paralympics.

“Ultimately, I’d like to win the Giant Slalom in PyeongChang, however I’d honestly just love to produce skiing close to the limit of my capabilities in that particular week every 4 years that everybody else decides means something,” Gourley said.

“The environment is always pretty challenging at the Games, but I’d like to think I’ve matured enough to cope a little better the third time around. I’ll be content if I can put down some of my best skiing that week.”

Along with Gourley, dual Paralympian Melissa Perrine has competed at two competitions in Austria at the start of the Northern Season. Along with her sighted guide Andy Bor, the pair recorded a win at the recent Europa Cup race held in Kühtai, Austria. After a shaky start in the first two days of competition, Perrine and Bor delivered two good runs together and won the Giant Slalom ahead of Millie Knight of Great Britain and Russia’s Aleksandra Franteseva.

Perrine, who has won eight World Championship medals in her career so far, will continue some more training before returning home to Australia. She will take the rest of the season off as she focuses on her university studies.

With two years until PyeongChang, Perrine is in a good place to come back next season and ramp up her competition ahead of the next Winter Paralympics.