Grade 2 Para-Equestrian Emma Booth has had the ride of her life during Friday’s Freestyle at the Boneo CPEDI, receiving a very strong 79%. 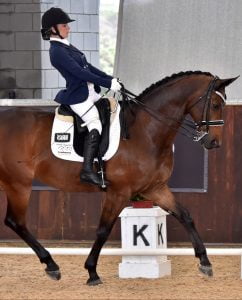 It caps off a very successful week for Australia’s Para-Equestrian program and if scores achieved throughout the three days of competition are anything to go by, Australia is looking to be extremely competitive come Rio.

Four combinations received scores greater than 70% during today’s Freestyle and the results across the competition have been strong each day with several combinations scoring consistently in the low to mid seventies.  In the team’s event the Australian team of Sharon Jarvis (Ceasy), Victoria Davies (Andaluka Elegido) Katie Umback (Gondskovlunds Marquis) and Joann Formosa (GB Winchster) achieved a combined 429.362 – the highest ever score of an Australian Para-Equestrian team.

With eight months to the Paralympic Games, the results are a good indication that Australia is on track.

“We had some excellent results come out of this event but what’s most promising is that many combinations are new or just starting out together,” said National Performance Director for Para-Equestrian, Julia Battams.

“With more time and training we could see some very promising results and there are a number of combinations knocking on the door for one of the four team positions so this next period is going to be an exciting time for our sport,” said Battams.

It’s taken a global search and more than a year of looking for Emma Booth to find her horse and in the end Mongelvangs Zidane was only located a short 30 minute drive from her home in Victoria.

“We’ve been looking for a horse for a year and a half and we’ve done two trips to Europe. I sat on a number of horses over there but nothing ticked every single box.

“It was Lone (my coach) who put this combination together. As soon as I sat on him he just felt amazing and he’s been impressing ever since.

“He was perfect in there, didn’t put a foot wrong. He was rhythmical, balanced and spot on. He did all the hard work.”

Although the partnership is new, Booth says she’s come to know the horse well in the last three weeks.

“He has picked it all up really quickly and I’ve adjusted my way of riding a little to go with what responds well with him.

“He takes it all in his stride. I’ll keep working with him until Sydney (final nomination event) but today’s score is going to be a tough score to top.”

For Australian based hopefuls vying for selection the final opportunity to obtain a qualifying score will be at the Sydney CDI3* in April. A number of combinations will also be campaigning in Europe and the first northern hemisphere nomination event also gets underway in April.