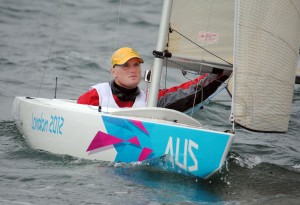 Paralympian Matt Bugg (TAS) also moved into medal contention and is now ranked third in the 2.4mR fleet after posting a third and second place in today’s two races.

Australian Sailing Squad’s sailors also had a great day with SKUD18 crew of Ame Barnbrook (NSW) and Brett Pearce jumping up the leader board into overall ninth, while Neil Patterson (TAS) climbed up into 28th in the 2.4mR.

Melbourne’s run of perfect sailing conditions continued on the bay for races three and four of the Para Worlds, Williamstown’s Royal Yacht Club of Victoria.

The breeze was generally a southerly, starting at around eight knots and steadily building to approximately 12 knots towards the end of the second race.

Two-Person Keelboat – SKUD-18
Daniel Fitzgibbon and Liesl Tesch are the defending World Champions and continue their lead after posting another second and first place on day two of the event.

“Today was a bit the same as yesterday, it was a bit of a ground hog day, unusual but that’s what happened. We’re happy we’re still maintaining the lead and the boat is going well. We’re getting better and are still working on the little things and taking every day as it comes,” Dan Fitzgibbon said.

“Apparently a lot of wind is coming and that’s good for us as we enjoy the wind. We will just deal with it when it comes but apparently it should be a bit more windy over next couple of days,” he added looking ahead.

Australia’s second SKUD18 crew of Ame Barnbrook (NSW) and Brett Pearce (NSW) did not have a good start to the event yesterday after the pair had to finish the day early after an equipment failure just before the start of the second race, which resulted in a disqualification. Consequently they had to carry maximum points in that race on their scorecard into today’s racing.

But they made up for it today posting a fifth and third and jumping from 18th into ninth overall.

“We just looked at today as a new day, stuff like yesterday happens and every sailor has had things like that happen to them on the water. It was another day and we just fought back and will take each day as it comes and hopefully keep climbing up the ladder,” skipper Ame Barnbrook said.

“It was beautiful out on the water today, with nice amounts of pressure and ninth really isn’t bad at all after yesterday’s ‘did not finish’. We had great starts, which we are improving on. The actual racing was really close and which made it an even better day and we’re pretty happy with our results overall.”
Three-Person keelboat – Sonar
Colin Harrison, Russell Boaden and Jonathan Harris defended their lead in the Sonar after a two race wins on day one and two second places today.

“Today was a little but more difficult than yesterday and we got two seconds. In the first race Norway and in the second race France just pipped us on the line. Certainly everyone else is getting better and more used to these conditions,” Jonathan Harris said.

“It was very lumpy out there and I thought yesterday that people weren’t tuning their boats to the lump but today everyone is just a lot faster and we had to work a lot harder to stay in front of the pack.”

“In the second race we unfortunately had a near collision with another boat and ended up breaking some equipment. We were running first when that near collision happened and we finished the race second, so we still got a strong result and felt pretty good given that we were running without the spinnaker and our jib pole throughout the whole race and we were pretty happy with the way we pulled that one out.”

An Australia protest for the second race is pending.

One-Person Keelboat – 2.4mR
Australian Sailing Team’s Paralympian Matt Bugg had a strong second day and was excited about posting a third and second and moving into third overall.

“It was a great day, perfect conditions and I had a really good one, so I’m stoked, Matt Bugg said.

“It was Port Phillip at its best with 10-15knots and sunshine. It was really tough racing but I managed to get out at the start and I loved it.”

Bugg finished fifth in the 2.4mR at last year’s World Championships, continuously worked his way up the ranks over the international competitions this season and is planning to do the same at these World Champs.

Australian Sailing Squad’s Neil Patterson also had a good second day after getting black-flagged in the first race on day one after jumping the start. Posting a 21 and 15 in the 48-boat fleet he moved from 41 into 28 overall.

“I had a pretty good day and a lot better than yesterday with my OCS, so I am pretty happy. I just have to remember to not start five seconds before everyone else and as long as I don’t do that everything goes to plan,” Neil Patterson laughed.

Racing is scheduled to resume at 13:00 on Monday, 30 November out of the Royal Yacht Club of Victoria in Williamstown, Melbourne, Australia.

It is the first time that Australia is hosting the Para World Sailing Championships and racing out of the Royal Yacht Club of Victoria (RYCV) in Williamstown, all five crews of Australian Sailing Team’s (AST) and Squad (ASS) Paralympic boat class sailors are contesting the event and aiming to defend their 2014 Nation’s Cup win as the team prepares for the 2016 Rio Paralympic Games (7 – 18 September 2016).

142 sailors from 31 nations are competing across three Paralympic events and over six days on Port Phillip, Melbourne, Australia from 28 November to 3 December. It is the largest Paralympic World Sailing Competition in the lead up to the 2016 Rio Paralympic Games.