Another world record sends Holt to the top of the podium

The meteoric rise of Isis Holt (Vic) in athletics has continued, with the 14-year-old smashing yet another world record to win gold in the women’s T35 100m for athletes with cerebral palsy. 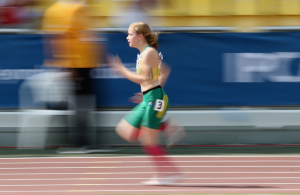 Delivering her second opportunity to sing the anthem from the top of the podium after she won the world title for the 200m earlier in the program, Holt’s performance of 13.63 (w: +2.0) confirms her status as one of the athletes to watch at the Rio 2016 Paralympic Games.

“This is going to take a little while to sink in, it really is amazing. I honestly can’t believe it,” Holt said.

“I felt confident coming into all of this but I’ve never raced in this kind of environment so you don’t know what might happen. I’ve never raced against Maria either; she’s a great athlete. I just wanted a medal, but to have this is just great.”

Amazingly, Holt will return to Australia in the coming days, returning to Year 8 at Melbourne Girls Grammar School next week.

“Its crazy to think that I have to go back to school next week. Everyone at home is going to be so excited, but hopefully I settle back in pretty quick,” Holt added.

Holt began competing in athletics in 2014, competing at her first Australian Junior Athletics Championships that same year. She won the Athletics Victoria Outstanding Para-Athlete Award for the 2014/15 season and broke the then T35 world records for the 100m and 200m to ensure her selection to the Australian Flame team at these IPC Athletics World Championships.

She will now turn her attention to the women’s T35-38 4x100m relay on Saturday 31 October, the last day of competition, where she will be joined by Ella Pardy (WA), Jodi Elkington-Jones (NSW) and Erin Cleaver (NSW) in the race for medals.

Not to be outdone, Brianna Coop (Qld) joined Holt on the medal dais, winning bronze in a personal best time of 15.11.

Coached by Dayne O’Hara, Coop is competing at her first major international championship and placed among the top-eight in the 200m earlier in the program.