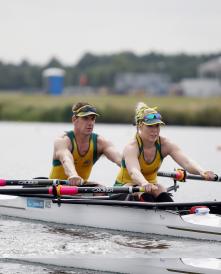 Australia’s reigning para-rowing World Champions, Erik Horrie (ASM1x) and Kathryn Ross and Gavin Bellis (TAMix2x) both won their heats to book places in the semi-finals and A-Final of their respective boat classes.

Horrie, who won his heat in a time of 4:42:45, the fastest of all the ASM1x heats said post-race: “It’s only the start of the process, Championships aren’t won on the first race but it’s good to get the first one out the way.

“Conditions weren’t too bad here in Aiguebelette, the wind came up just before the race which made conditions unusual but everyone had to deal with the same thing and that’s the joys of rowing.

“Between now and semi-finals it’s about keeping things as normal as possible and to maintain my training regime and focus on the end goal.”

The ASM1x boat class has 23 entries this year, which in Horrie says is fantastic:  “It’s great for Paralympic rowing in general to see the size of the field. It’s showing everyone that the level of rowing going up with so many other countries involved.”

The afternoon’s racing saw, Horrie win the ASM1x nearly 20 seconds faster than his closest competitor in his heat.

The TA Mixed Double Scull of Gavin Bellis and Kathryn Ross had a competitive heat with the reigning World Champions winning in a time of 3:59:36. The Australians got away quickest in the heat with their opening stroke rate around 40 strokes per minute, however the Ukrainians and Dutch were closely pursuing the 2013 and 2014 World Para-rowing Champions.

As the other crews made their bid to overtake Ross and Bellis, the duo coached by Gordon Marcks, kept their stroke rate at 38 and showed their worth by staying just in front to qualify for the A-Final in time just five seconds outside of the World Best Time.

The Legs, Trunks and Arms Mixed Coxed Four of Kate Murdoch, Jeremy McGrath, Alistair Chong, Sara Waitzer and coxswain Jo Burnand made their debut at the 2015 World Rowing Championships today. The crew were up against the 2014 silver medallists in the event, Italy, as well as Germany, South Africa, Austria and Russia.

The young crew were focused on the task at hand but finished in fourth with Italy and South Africa taking the two automatic qualifying places. The Australians will now contest the repechage tomorrow (Tuesday).