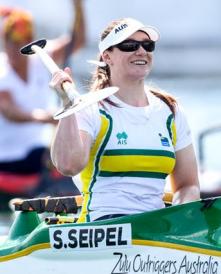 Susan Seipel has backed up her K1 bronze medal performance that saw her secure a Paralympic quota on Wednesday by winning gold in the V1 200 VL2 final in Milan today.

The 29-year-old dominated the final, leading from start to finish to win in 59.916, 4.373 seconds ahead of Russian Nadezda Andreeva.

As she crossed the finish she admits that she was really happy with her performance.

“Sometimes you cannot tell where you have placed because it is really close but I knew I had got that one so I was so happy,” Seipel said.

“It was a great race, I just kept going hard and I have been working as much in V1 as I have in the K1 so I am so glad that I got there.”

Seipel got off to a powerful start and despite being well out in front her stroke rate remained strong for the entire race.

“I just focused on my lane and keeping the va’a straight because it is challenging with the wind and trying to get quick changes. I couldn’t see anyone else I was just focused on getting to the line,” Seipel said.

The Brisbane paddler now takes Australia’s medal tally in paracanoe events to five, following on from the heroics of Amanda Reynolds and Curtis McGrath on Thursday.

“It is so great to have so many medalists in the team and we are all very supportive of each other and it has just been a fantastic meet,” Seipel said.