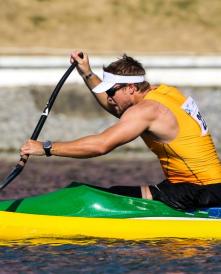 The Paracanoe World Championships will be contested on the opening day.

Seven Australian’s will race to secure quotas to the Paralympic Games in 2016.

Athletes who finish inside the top six (minimum three continents) in the K1 events will earn their nation a Paralympic quota.

Racing is scheduled to commence at 4pm AEST with South Australian Sam Germein to race first in the KL3 K1 200 heats.

This year they will be Australia’s top medal chances once again.

McGrath will double up this year, he will be out to defend his V1 world title, but more importantly push for a medal in the K1 event to secure Australia a Paralympic quota.

Reynolds is aiming to improve on her bronze medal performance last year.

“I would love to,” Reynolds said.

“I think the pieces of the puzzle are starting to click in and my technique is getting a lot better and the boat control, so it would be awesome to get up further but our goal is to get through to the final, keep pushing and aim for the top.”

Joining the pair to compete at the Paracanoe World Championships once again will be Penrith paddler Colin Sieders (KL1) and Susan Seipel of Brisbane (KL2).