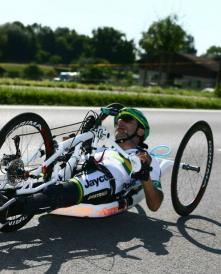 Australia has finished with nine medals including three gold at the UCI Para-cycling Road World Championships in Nottwil, Switzerland.

On the final day of competition, Emilie Miller (NSW) finished first in the H1 road race.

It was the second first place for team debutant Miller who also recorded the fastest time trial on Friday,  however due to the event not meeting UCI regulations regarding the minimum number of participants in each category in order for medals to be awarded, Miller will not be awarded a world title for either result.

In the women’s C4 Alexandra Green (NSW) earned silver in the time trial, while Sue Powell (ACT) finished with silver in the road race.

The Championships will feature road races and time trials across a number of classifications – bicycles (C1-5), tri-cycles (T1-2), hand-cycles (H1-5) and Tandems in both the men and women’s categories.