Susan Seipel proud to be wearing green and gold again 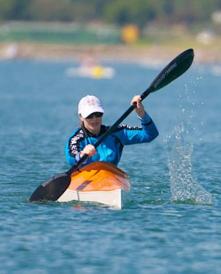 Susan Seipel will depart with part one of the paracanoe squad headed for Varese, Italy today in preparation for the World Championships to be held in Milan from 19 to 23 August.

The 29 year old made her worlds debut last year, finishing sixth in the KL2 (formerly TA) K1 200 final and is feeling far more confident this year.

“I definitely learned a lot from my first world championship experience in Russia.”

“I am fitter and stronger than I was this time last year and much better prepared for multiple races, as I will be racing both K1 and V1.”

Seipel has had a “very good” preparation.

“I’ve been a lot more consistent with training in the last year and also doing a lot more work in the gym,” she said.

“I am based at Brisbane Canoeing Club where I get great support but I have also been training every week with Andrea King at Varsity Lakes which has been really beneficial.”

“Also, I have done more domestic racing in the last 12 months, so I’ve been able to practice my race plan under competition conditions.”

With this year’s World Championships doubling as a Paralympic selection event the Australian team will base themselves at the European Training Centre leading into the 19 August start.

“I’m looking forward to getting over to Italy and training at the ETC with the rest of the Paracanoe Team,” Seipel said.

“It is going to be really good to be able to drive into Milan and get acquainted with the venue and course before the event.”

Off the water Seipel is a crazy cat lady and has been volunteering with the RSPCA for four years.

“Previously I worked at the wildlife hospital which was really interesting and I learnt a lot about native animals.”

“Currently I foster cats and kittens that carry the influenza virus (cat flu) until they get adopted.”

“I usually get one or two older cats to look after because they don’t cope in the shelter, but at one stage I had eight kittens and two cats at once which was really fun but a little bit crazy cat lady!”

“My house was a mess but it was worth it as they all found loving homes.”