Alcott is latest Paralympian to deliver a TEDx Talk 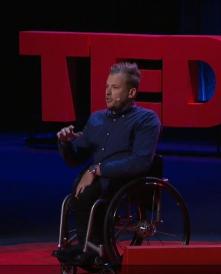 The wheelchair tennis player spoke to 4,000 people at Sydney Opera House following a long line of para-athletes who have given TEDx Talks.

Australian wheelchair tennis ace Dylan Alcott has challenged the way people think about disability with a TEDx Talk to more than 4,000 people at Sydney Opera House in Australia.

The 24-year-old, who is currently the world No.1 in the quad world rankings, delivered his 15 minute talk in May, giving a fresh perspective on what it is like to live with an impairment.

“The TEDx Talk was an incredible opportunity to express some of my views about mainstreaming disability and breaking some of the misconceptions that surround it,” said Alcott who won wheelchair basketball gold at the Beijing 2008 Paralympic Games.

Alcott is the latest in long line of Paralympians to have delivered a TED Talk in recent years.

Find out who else has given a talk below:

The IPC President spoke in 2013 on how Paralympic sport is society’s unique educator relating to his life as an athlete playing wheelchair basketball right through to his role today as the head of the Paralympic Movement.

The Dutch Blade Runner spoke in Amsterdam, the Netherlands, on equality in difference, a talk which focussed on how she got into para-sport and went onto become a Paralympic champion at London 2012 and went on to break numerous world records.

Purdy was a bronze medallist in snowboard when the sport made its debut at the Sochi 2014 Paralympic Winter Games. She then went onto become a household name starring in “Dancing with the Stars”. In this powerful talk, she shows how to draw inspiration from life’s obstacles.

Aged 19, Lewis was Bermuda’s only Paralympian at London 2012. In this talk, the wheelchair racer gives insight into her journey to her first Paralympic Games.

After competing at the Barcelona 1992 Paralympic Games, Mullins pursued a highly successful career as a model and actress. She was appointed a global L’Oreal Ambassador in February 2011 and has starred a number of Hollywood movies. At London 2012 she was Chef de Mission of the US Paralympics team.

On his Paralympic debut at London 2012, Colbourne won a gold and two silver medals in cycling. In this talk he highlights how within three years of breaking his back in a near fatal para-gliding accident he was Paralympic champion.

A two-time Paralympian in football 7-a-side, Wolff in this talk challenges society to consider the power of inclusion for people.

Sundquist competed at the Torino 2006 Paralympic Winter Games in alpine skiing and has since gone onto become an internationally known motivational speaker. He also manages an extremely popular YouTube channel.

In “Pushing the boundaries in athletics” Salt talks about overcoming a life-threatening motorcycle accident to become one of the world’s leading snowboarders.

US sprinter Shirley won back-to-back gold medals in the 100m T44 at the Sydney 2000 and Athens 2004 Paralympic Games. In this talk via webcam, he tells the story of how he overcame obstacles both physical and situational.

TED is a non-profit organisation devoted to spreading ideas, usually in the form of short, powerful talks. Formed in 1984 as a conference where Technology, Entertainment and Design converged, TED today covers almost all topics — from science to business to global issues — in more than 100 languages.