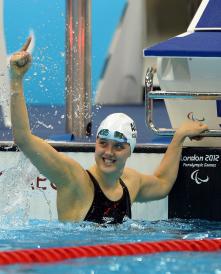 “We have got a very strong team,” Paralympic Performance Manager Adam Pine said.

“I’m very confident with the way we have picked our team. The requirements we set have brought out some great performances here this week. We know that we are taking athletes to Glasgow who are going to be in the finals and vying for medals.”

Paralympians Blake Cochrane, Ellie Cole Brenden Hall and Jacqui Freney all recorded times in their respective events that would have seen them ranked number one in the world for 2014 and will headline the IPC team set to race in Glasgow from July 13-19.

After being told she may never be able to swim competitively again, Ellie Cole made a triumphant return to the pool at the 2015 Hancock Prospecting Australian Swimming Championships taking gold in the women’s 100m backstroke and 50m freestyle and recording the number one ranked time in the world for her classification.

This will be Cole’s third World Championship team after also representing Australia in Eindhoven 2006 and Durban in 2010.

Swimming his way onto his fourth world championship team, Blake Cochrane produced the swim of the meet when he set a new world record for his classification (S8) in the men’s Multi Class 100m breaststroke.

Joining Cochrane and Cole will be 8-time Paralympic gold medallist Jacqui Freney who impressed in the 400m freestyle this week and following a break in 2014 will be back with a vengeance in Scotland.

While Hall, who swims anything from the 50m freestyle to the 10km open water events, will be a force to be reckoned with in the men’s 400m freestyle in Glasgow after collecting the Australian Championship crown and clocking a world class time of 4:10.90 in Sydney this week.

The Australian Dolphins Swim Team for the 2015 IPC World Championships