Automatic selection to Australian Flame team for O’Hanlon and Reardon 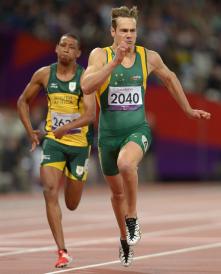 Para-athletics world champions Evan O’Hanlon (ACT) and Scott Reardon (NSW) are on track to defend their crowns after today being confirmed as automatic selections for the IPC Athletics World Championships later this year.

The first two athletes declared as starters in the Australian Flame team bound for Doha 2015, the Canberra-based duo, who are coached by the renowned Iryna Dvoskina, will both compete in the 100m, with O’Hanlon to go against athletes in the T38 cerebral palsy class and Reardon to burst from blocks alongside T42 leg amputees.

“Congratulations to Evan and Scott on their automatic selection to the Australian Flame team for the IPC Athletics World Championships. The Selectors wish you the best of luck as you prepare to defend the gold medals you won in France two years ago,” Dion Russell, the Athletics Australia Chairman of Selectors, said.

“The Selection Policy calls for automatic selection to be offered to athletes who won a gold medal in an individual event at the last IPC Athletics World Championships so long as they have attained at least one Athletics Australia ‘A’ Standard in that event during this qualification period. Evan has done this in for the T38 100m on three occasions, while Scott has bettered the required mark for his T42 class seven times, ensuring that they are eligible to be picked now.

“The remainder of the team will be confirmed at the Final Selection Meeting to be held after the close of the qualification period in the week commencing 31 August 2015.”

O’Hanlon is one of the most outstanding para-athletes in history, boasting five Paralympic gold medals, a further seven titles from the IPC Athletics World Championships and the world records for the T38 100m and 200m.

A multiple winner of Athletics Australia’s Para-Athlete of the Year Award, O’Hanlon this year created history by winning the men’s able-bodied 100m at the ACT Athletics Championships, becoming the first para-athlete to do so. He missed the Australian Athletics Championships through injury, but has his sights set on double gold in the 100m and 200m in Doha (QAT) this October.

His training partner Reardon has burst on to the scene in more recent times, winning silver on debut at the London 2012 Paralympic Games before dead-heating for gold in the T42 100m at the IPC Athletics World Championships the following year. He also won silver in the 200m.

More recently, Reardon won gold at the Australian Athletics Championships in the men’s ambulant 100m with his time of 12.14 sending a clear message to his main rival Heinrich Popow (GER) that he is on track for great success this season.

“It’s exciting. It’s always exciting to get selected for your country. It’s good to be confirmed this early. It means that we can get back to basic training in the knowledge we are on the team, because it takes time to build up to a world championships and the earlier you know the better,” O’Hanlon said.

“Lyon two years ago was an interesting campaign for me coming off pretty serious illness. On one hand it was disappointing that I wasn’t in the shape that I would have liked and I missed the chance to have a crack at the world record in the 400m, but on the other side of that it is great to know that despite what was an unideal preparation I am capable of pulling it together at the championship and performing well.

“The automatic spot confirms the 100m, but I am very interested about seeing how quickly I can run in the 200m this time. I haven’t raced it since 2013 and I’ve always felt it was my weaker event so I am keen to test myself a bit in it. I enjoy the 100m the most though, and hopefully I can lower my time there. That would be great. The aim is to get as close to breaking the world record as I can and then begin to get ready for what will be a massive year in 2016 with the Paralympic Games.”

The IPC Athletics World Championships will be held in Doha (QAT) on 22-31 October 2015, less than twelve months out from the Rio 2016 Paralympic Games.

At the Lyon 2013 event two years ago, the Australian Flame team won 30 medals (four gold, 11 silver and 15 bronze), to place fourth overall on the tally of medals and exceed the 27 the team won at the London 2012 Paralympic Games the year before. The team had 17 individual medallists, just one shy of half the team, with four of those medallists debutants and a further two winning a medal for the first time.