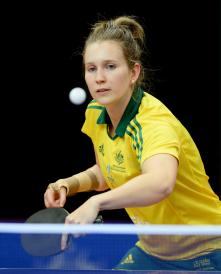 The 2015 edition of this biennial event marked the first time an event has integrated able-bodied and para-table tennis athletes in the history of the ITTF. In addition the event was a Rio 2016 Paralympic Games qualifier, attracted a number of new athletes and saw Fiji participate in their first ever international para-table tennis tournament.

Rodan impressed the para-table tennis world, beating Australian No. 1 Rosalie Turnbull in her final round robin match and placing second in the Class 3-5 event to Daniela Di Toro of Australia. Rodan started playing just six months prior to the event, following the introduction of the Pacific Sports Partnership Smash Down Barriers programme, which operates in Fiji, Kiribati and Vanuatu. The programme looks to provide opportunities for people with an impairment to participate in sport.

Tapper who competed in both the able-bodied ITTF Oceania Cup and the ITTF Oceania Para-Table Tennis Championships, was victorious in para-table tennis, defending her title in the Class 6-10 event. The Paralympian beat Australian Andrea McDonnell in the final.