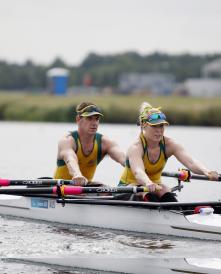 Ross was named the 2014 Female Rower of the Year after following up her 2013 World Rowing Championship gold medal in the Trunk and Arms Mixed Double Scull with another dominate season in the boat with her partner Gavin Bellis.

Ross and Bellis won gold at the Sydney International Rowing Regatta in 2014, while also claiming top place in the Gavirate International Para-Rowing Regatta and then capping of a fantastic season by retaining their TAMix2x title at the 2014 World Rowing Championships in Amsterdam.

Upon receiving the accolade, Ross said: “I feel really honoured, I’ve been in the game a long time and it’s the first time I’ve received this award. It’s been a great couple of years and we’ve really capped it off, and this just helps to push us more and more, we’re in it for the long haul and I can’t wait to see what this year brings at the World Rowing Championships.”

Ross’s double scull partner, Bellis was named the 2014 Male Rower of the Year. Bellis’ back-to-back gold medals at the World Rowing Championships in 2013 and 2014 have further cemented the former Australian’s Army Sergeant as a force to be reckoned with in the para-rowing world.

Bellis said: “It’s an amazing feeling. It has been an incredible few years from the disappointment of London 2012, but this has capped off a great season.”

Unsurprisingly, Bellis and Ross’ coach, Gordon Marcks was named the 2014 Rowing Coach of the Year.

Marcks became the Senior Coach of Para-Rowing at Rowing Australia after the London 2012 Paralympic Games and focussed specifically on coaching the Australian Rowing Team’s Trunk and Arms Mixed Double Scull, to which he has done with aplomb scoring back-to-back World Championship medals in 2013 and 2014.

Bellis and Ross were delighted to see their coach win his accolade and jointly added: “It’s thoroughly deserved that Gordon received this award tonight.

“From our perspective, the mutual respect between coach and athlete has been amazing with Gordon, and therefore communication has been amazing. We work well as a team, the three of us, there’s not just Kat and I in the boat, Gordo’s with us, even if not physically in the boat.”

Running a strong Para-Rowing program at Rowing Australia has seen other members of Marcks’ program secure medals, including Erik Horrie who claimed back-to-back gold medals at the 2013 and 2014 World Rowing Championships in the ASM1x, which in turn has made Marcks the lead coach of the most successful para-rowing program in the world in 2014.

Marcks said: “I’m enormously proud of Kat and Gav this evening, it’s a nice recognition of all the hard work that they have done over the last season.

“I think tonight’s win for me is a combination of things, having fantastic athletes, having good support staff, where everyone is on the same team and being consistent with our messaging and being accommodating and supportive of all para-rowing, be it at an elite level or at the level where we are trying to develop the sport.”