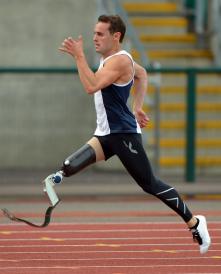 Statisticians have been put on notice ahead of the IPC Grand Prix in Brisbane this Saturday, 7 March, with Para-athletics world champion Scott Reardon (NSW) and two-time London 2012 Paralympic medallist Rheed McCracken (Qld) chasing the clock with world record-breaking performances in their sights.

Reardon, who is a T42 class leg amputee, will duel with world record holder Evan O’Hanlon (ACT) and his Australian Flame teammates Chad Perris (WA), Gabriel Cole (SA) and Brayden Davidson (SA) in the men’s ambulant 100m and starts after clocking his second fastest time ever of 12.24 at the Canberra Track Classic earlier this Australian Athletics Tour.

Only his second outing for the year, the performance has boosted the confidence of 24-year-old Reardon and he now has aspirations for even quicker performances this season ahead of the 2015 IPC Athletics World Championships where he will again line up alongside Heinrich Popow (GER), the man he shared gold with in Lyon (FRA) two years ago.

“It seems like only yesterday that I ran the 12.14 to win the 2013 national championship, and from where I stand I feel like I’m a better athlete. I know that I can run faster and I know that I am absolutely stronger after some great training under my coach Iryna Dvoskina,” Reardon said.

“I don’t see any reason why I can’t improve even more and run even faster. I’ve done the work that I need to and had a great start to my season with my race in Canberra a few weeks back. I come into every season wanting to improve and I hope that this season I’ll be able to make that happen and again challenge the best when we get to the World Champs in Doha.”

“If not a PB this weekend I want to come away from the IPC Grand Prix knowing that I’m headed to the business end of my domestic opportunities, with Nationals just around the corner, on the way up rather than plateauing. This time of year is our chance to show the world what they have to chase to beat us come championship time.”

Reardon is thrilled to see the second leg of the internationally hosted IPC Grand Prix series scheduled for Brisbane, with the event providing him a chance to compete alongside the best athletes from Australia and the world on home soil. It’s the first time that the event has been hosted Down Under.

“To have an IPC Grand Prix in Australia is such a great opportunity for everyone in both our country and the region. There seems to be athletes coming from all over the place to run and that’s a great thing for para-athletics Down Under because it brings it to the attention of people at times that aren’t the Paralympic Games or a World Championships,” Reardon added.

“And the track in Brisbane is one of my favourites so I am happy that it is there. I’ve run three 200m PB’s on the track over the years and this time of year you usually end up with pretty favourable tail winds which is ideal for athletes like me who spend most of their time on the straight.”

McCracken burst on to the international para-athletics scene when he won a silver and a bronze medal in T34 wheelchair sprints for athletes with cerebral palsy on Paralympic debut at London 2012. The youngest member of the Australian athletics team at the Paralympic Games, he made sure he would not be forgotten when less than twelve months later he added a further four medals (three silver, one bronze) to his already impressive trophy cabinet at the IPC Athletics World Championships.

He has spent the past three weeks training in Newcastle (NSW) under the watchful eye of his coach Andrew Dawes, and he hopes that he will reap the rewards of the hard work when he takes to the track at the IPC Grand Prix this weekend.

“Since London 2012 I have almost felt like I’m on a roller coaster and it definitely has been an amazing journey. In the next two years I am expecting big things, it’s what we train for and what I put my life in to making it happen so I am really hoping 2015 and 2015 are my years,” McCracken said.

“I’ve spent the past three weeks in Newcastle and I’ve been putting my life skills to the test with preparing for the future, it’s been a great experience for me in a way where I am really learning to be independent and fend for myself. The Dawes family have been great to me. From my time in Newcastle I’ve come out ten-times fitter for sure and that just raises my personal expectation for my performances on the track.

“Brisbane this weekend gives me the chance to put the past three weeks in to practice so I’m hoping for big things, maybe not a world record but I can’t count it out fully. I’m in very good shape. I’ll be pushing myself the most in the 800m, I want to know how my training has gone. Although I have already qualified for Doha, the times are very important to me and I want to keep punching out performances as quick as possible across the whole build-up to Rio 2016.”

McCracken boasts a big program at the IPC Grand Prix this weekend, with starts in the 100m, 200m, 400m and 800m for wheelchair athletes. He faces stiff competition too, with Paralympic champion Richard Colman (Vic) and his London 2012 teammates Sam Carter (Qld) and Matthew Cameron (Qld) also entered.

For more information on the IPC Grand Prix to be held in Brisbane (Qld) this Saturday 7 March, please click here.