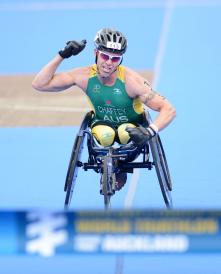 The cream of Australia’s Para-triathletes will start to prepare for the world stage after a successful National Paratriathlon Championships at Redcliffe.

The stars of the recent ITU Para-triathlon Event on the Sunshine Coast were again out in force as the domestic season wound up before most athletes scheduled in a well deserved break before continuing with their ITU series aspirations leading into the ITU World Championships in Chicago in September.

Among the winners were:
-In the men – Four-time ITU World Champion Bill Chaffey, who again dominated the PT1 class from Nic Beveridge (QLD) and Nige Young (WA).
-London Paralympic runner Jack Swift, who was the stand out on the Sunshine Coast in the highly competitive PT4 group, and won again ahead of Dale Grant (VIC) and debutant Joshua Kassulke (QLD)
-WA’s Brant Garvey who continued on his consistent form to take out the PT2 category over Glen Jarvis (VIC) and newcomer Thomas Goodman (SA) with Jonathon Goerlach winning the vision-impaired PT5s;
-And in the women Emily Tapp (QLD) continued on her merry way, adding the Australian Championship to her ITU Paratriathlon title ahead of another first-timer Sara Tait (QLD).
-Debbie Wendt (QLD) won the PT3 category; Kate Doughty (VIC) beat Claire McLean (WA) in the PT4 and Katie Kelly (NT) continued to show her transition into the Paratriathlon world continues to be a successful beating Beth White (NSW) and Casey Hyde (VIC) in the vision impaired PT5 category.

Triathlon Australia’s National Manager Para-triathlon, Kathryn Perriac said: “For the elite athletes this was their last domestic race, and they will take a short break before preparing for international races in May (Yokohama, Madrid, London) and then later in August (Rio Test Event, Detroit) followed by the World Championships in Chicago on September 17th.

“Some of those who raced on Sunday will next join the Australian Age Group Team to race at the Chicago World Championships in the Open Paratriathlon event.

“Others such as Bennett Powell and Debbie Wendt are stepping up to 70.3 races in the next few months.

“These National Para-triathlon Championships provided another opportunity for paratriathletes of all abilities to race together, from multiple World Champion Bill Chaffey to first timers like Thomas Goodman and Joshua Kassulke, and teenagers Matthew Stark and Sara Tait.

“A huge thanks to Triathlon Queensland who staged a professional event at an accessible and picturesque location at Redcliffe and their support of Paratriathlon is greatly appreciated.

“Combining with the Queensland State Sprint Championships ensured there were plenty of people watching and cheering on the paratriathletes.”