Para-cycling World Championships by the dozen for Gallagher 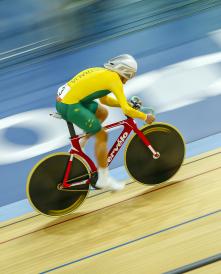 When it comes to cycling resumes, Michael Gallagher’s is certainly not ‘a dime a dozen’, with the nine-time track and road world champion looking to add to his tally on the eve of his twelfth straight UCI Para-cycling World Championships.

The Victorian departed Adelaide on Tuesday with the 14-member Australian team for the 2015 UCI Para-cycling Track World Championships to be held in Apeldoorn, Netherlands, from 26 – 29 March 2015.

Gallagher, now 36, claimed two world titles while on debut on the Australian team in 2006 and has not missed a track or road World Championships since.

The Scottish-born cyclist has collected eight rainbow jerseys on the track during that span and his glittering career also boasts two Paralympic gold medals in 2008 and 2012, and the 2013 road world crown.

“I just really love cycling, love the training, preparing for an event, focusing on something,” Gallagher revealed as his motivating factors.  “The emotions it gives you leading in, the nerves, how you feel alive on the day as well.

“It has been a big part of my life, and it is great that I can be a role model to anyone else who chooses to look at it that way.  If they can take something away from my career, that is fantastic.”

A relaxed, but eager Gallagher enters his sixth Track World Championships as the reigning world champion and record holder in the individual pursuit.

“I will be disappointed if I don’t come away with one medal at least from the Championships, in particular the individual pursuit,” said Gallagher who will also line up in the scratch race alongside fellow Australian Alistair Donohue (VIC) who edged Gallagher for the national individual pursuit crown last December.

“Between myself and Alistair, we are aiming for a good result.”

“That certainly is a great statistic, and a good one to remember when we are there,” remarked Gallagher.

The Australian Para-cycling Track Team finished as the most successful nation at the 2014 Championships held in Mexico with a haul of 17 medals including five rainbow jerseys.