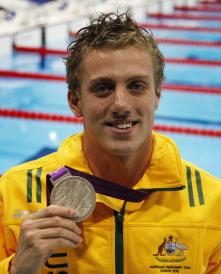 Australia’s most successful Paralympian Matthew Cowdrey has been appointed as the Team General Manager of the Australian Commonwealth Youth Games Team for Samoa, in September.

The recently retired triple Paralympian and triple Commonwealth Games representative has  jumped at the opportunity to impart his knowledge and experiences on the next generation of Australian sportsmen and women.

Cowdrey, 26, will lead the Australian team for the fifth edition of the Youth Games which will see a team of 120 (82 athletes and 38 officials) in Apia, Samoa from September 7-12.

Seventy-one Commonwealth nations are expected to take part in the Games which will attract 1,250 athletes and officials (1,000 athletes).

He has a strong affiliation with the Commonwealth Games winning three gold and a silver across three Games with double gold in the 50 and 100m freestyle both in world record time in Melbourne in
2006.

Cowdrey answered a call from Australian Commonwealth Games Association CEO and one of Australia’s long standing sporting officials, Perry Crosswhite and admitted he was thrilled to get the call up.

“Perry asked me if I was interested and I didn’t hesitate – I see it as a huge honour and a great opportunity to lead the team and help the next generation of Australian athletes,” said Cowdrey.

“There is no reason why we won’t see a number of athletes on this team step up to the plate for a home Games in 2018 when the Commonwealth Games come to the Gold Coast.

“If I can play some small part in their development and share my experiences with them then that would mean so much.

“I have been lucky enough and privileged enough to attend three Paralympics and to be part of three Commonwealth Games including a home Games in Melbourne in 2006 and what an experience that was.

“I have also been very lucky to have seen what Steve Moneghetti has done with the last two Commonwealth Games teams, it’s exciting to take on this opportunity.

“To see Steve lead the team in Delhi in 2010 and Glasgow in 2014, teams I was a part of, has certainly given me a great example of an athlete turning their talents into management.

“I have learnt a lot over the past 10-12 years and at the end of the day it is all about enjoying your sport and being part of the Australian team and it is my role to make it a fun experience for the whole team.

“It can be daunting being away from home for the first time and among other sports and it is important for everyone to feel inclusive.

“And for them to have everything they need when it comes to game day and that everything runs smoothly.”

Cowdrey holds the record for the most gold medals (13)
and total medals (23) at the Paralympics by an Australian.