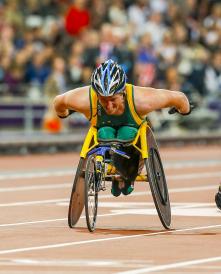 Australia will play host to the IPC Athletics Grand Prix series for the first time ever this weekend as more than 100 para-athletes from seven countries line up in Brisbane for the event, which doubles as the Queensland State Championships.

The meeting, which takes place from 6-8 March at the Queensland State Athletics Centre and is supported by Allianz, will provide both experienced and up-and-coming para-athletes from Australia, Oceania and Japan with a vital opportunity to showcase their talent in world class competition.

Iryna Dvoskina, one of Australia’s top Paralympic coaches, believes the meeting is vital to encourage more youngsters to get involved in the sport.

“It is very important to have a successful meeting in Brisbane,” she said. “It can be really hard to attract kids – athletics is a boring sport! It’s not a game; every day you have a routine. If we have international competitions then they can see that it is real, that people from around the world can compete here.”

Here are the key events to look out for in Brisbane:

Multiple world and Paralympic champion Evan O’Hanlon (T38) heads the field in the 100m sprint, and has already voiced his desire to break his world record mark of 10.79 set at London 2012. The 26-year-old has enjoyed a terrific start to 2015, qualifying for the Australian able-bodied National Championships later this month, and will prove hard to beat here.

One man hoping to upset the form book is O’Hanlon’s training partner Scott Reardon. The T42 athlete clinched gold at the IPC Athletics World Championships in Lyon, France, in 2013 and has set his sights on breaking the 11 second mark this season.

Visually impaired sprinter Chad Perris (T13) is another key contender, having set a personal best of 10.97 last year. It will come as no surprise that Perris is part of the same training group as O’Hanlon and Reardon; the trio train under the watchful eye of Dvoskina.

Watch out too for Papua New Guinea’s six sprinters, including Francis Kompaon (T46), silver medallist at the 2008 Paralympic Games in Beijing, and Elias Larry (T37), a former Paralympic swimmer and finalist in the 100m T37 at the Commonwealth Games in Glasgow, Great Britain, last year.

McCracken, Colman and Carter also line up together in what is sure to be a thrilling 800m race, with former T34 world record holder McCracken sure to be pushed all the way by Colman, Paralympic 800m T53 gold medallist in 2004 and 2012.

There is an impressive field in the men’s discus throw, with three New Zealanders out to make their mark on Australian soil, including Aodhan Hamilton (F36) who won discus gold at the New Zealand National Championships last year. Meanwhile Samoa’s Alefosio Laki (F37) faces tough opposition from fellow F37 thrower Guy Henly. The Australian won discus F37/38 bronze at the IPC Athletics World Championships in 2013 and will be the man to beat here.

There is a host of talent in women’s 100m, with the likes of Rachael Dodds, Carly Salmon and Erinn Walters all lining up from the T35 class.

At just 15-years-old Salmon already shows plenty of promise on the international stage: at the IPC Athletics World Championships 19 months ago, she finished fifth in the 100m T35 clocking 16.82. That race was won by Italy’s Oxana Corso in world record time (15.63) with Walters finishing seventh.

Ella Pardy lines up as the fastest T38 athlete, and could well challenge the current T38 world record of 13.04, having clocked 13.16 last year to sit fourth in the world rankings.

Another talented field, this time over one lap, with a number of T20 athletes to watch out for. Four Japanese competitors will be gunning for glory, including the two fastest on paper, Megumi Ikezaki and her compatriot Kako Tanaka.

At 22-years-old, Stephanie Schweitzer is one of the oldest competitors in the field, which just goes to show the great potential coming through the ranks. Her compatriot Isis Holt may be only 14-years-old but the T38 jumper has already leapt 3.46m.

Ranked 10th in the world last year, Schweitzer (F20) will be hoping her experience pays off, having leapt 4.79m to finish fourth at the London 2012 Paralympic Games, with a sixth place finish in the long jump F20 in Lyon. She’ll be pushed all the way by the Commonwealth F37/38 champion Jodi Elkington who jumped 4.39m for Commonwealth gold in Glasgow, Great Britain, last summer.

Live results from the IPC Athletics Grand Prix in Brisbane can be found here.

The meeting in Australia is the second in a series of nine IPC Athletics Grand Prix taking place around the world this year, culminating in the Grand Prix Final which takes place in London, Great Britain, in July.