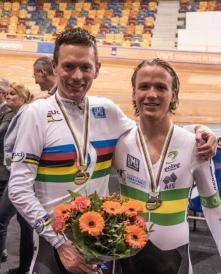 Australia finished second overall on the medal count with eleven medals from the four-day Championships – which featured 153 athletes from 30 countries and provided qualification points for the 2016 Rio Paralympic Games.

Day 4 recap
The Northern Territory born Donohoe, 20, took up cycling just five years ago, and a rapid rise through the ranks saw him make his debut for Australia at the 2013 UCI Para-cycling Road World Championships where he won two bronze medals.

His resume also boasts a number of major elite level results on the road including bronze in the 2015 Mars Cycling Australia Road National Championships Under 23 Road Race, plus a stage win in the 2014 Subaru National Road Series.

“It feels pretty awesome to win my first track title, more a relief that I’ve got one out of the way,” said Donohoe, who added to his individual pursuit silver medal claimed on day three. “It’s awesome, this is very much a cherry on the top of the cake for the week.

“The focus was more on the pursuit and a little bit on the kilo, but to make the top step on the last event and share it with Micky G.

“I have had tremendous support to get here, couldn’t ask for much more.

“Now I have to focus on the NRS and UCI races with my team Search2Retain-health.com.au for the next few months, and I am looking forward to heading to Europe in June to prepare for the Para Road Worlds in late July.”

While in the women’s scratch race, Powell and Green finished fifth and sixth respectively.