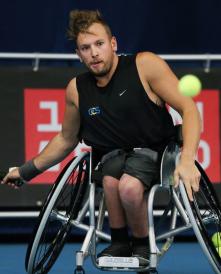 A year on from his first straight sets loss to world No. 1 David Wagner in the quad singles final of the 2014 Pensacola Open, Australia’s Dylan Alcott turned the tables on the American top seed in the title decider at this year’s UNIQLO Wheelchair Tennis Tour event in Florida to lift the third ITF 1 Series title of his career.

Reid already has one title to his name this year in Pensacola after partnering Joachim Gerard to win the men’s doubles, with British duo Lucy Shuker and Jordanne Whiley wrapping up a narrow victory in the women’s doubles final.

Such was Alcott’s impact on his debut in the quad division in 2014 that his first three matches against Wagner all went to a deciding set. It wasn’t until they met in Pensacola last March that Wagner gained his firs straight sets win over the former leading junior and two-time Paralympic wheelchair basketball medallist.

Alcott had to wait until the end of July for his first win over Wagner, but he has now won five of their last six meetings after a hard earned 75 76(6) victory in Saturday’s final that stretches the world No. 2’s sequence of unbeaten completed matches this season to 16. The only loss showing on his record for 2015 is a match Alcott never contested after withdrawing injured before his scheduled final at January’s Melbourne Open.