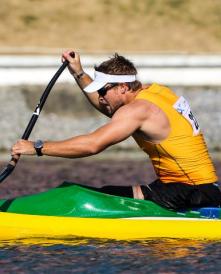 The fight for national selection commenced at the Sydney International Regatta Centre on Friday (20 February) with more than 190 athletes in action at Grand Prix 2.

With just six senior finals contested on the opening day of racing, the focus was on the Para-canoe athletes.

Brock Ingram, Curtis McGrath and Amanda Reynolds were amongst those that impressed.

Ingram won the LTA K1 200 final in 44.00, while Reynolds recorded an impressive win in the women’s version, 2.03 seconds ahead of Susanne Seipel.

But all eyes were glued on McGrath. With many interested to see how fast he could go in the K1 event, with less than a month of preparation.

Much to the delight of onlookers he excelled. His time of 46.30 would have been fast enough for a place in last year’s TA K1 200 World Championship final.

He was pleased with his start to the regatta.

“I went alright. I think that the results speak for themselves considering how long I have been in it,” McGrath said.

“I had a few issues with my paddle but that is all learning in the teething period you could say.”