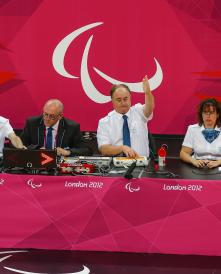 The International Paralympic Committee (IPC) released the second draft of the revised Classification Code on Wednesday, 4 February, marking the launch of the third and final round of consultation.

The revised Code, due for release in 2017, was developed from two periods of consultation during 2013 and 2014 which gathered responses from around the Paralympic Movement on the existing version of the Code.

The current IPC Classification Code was adopted by the IPC Governing Board in 2007 and provides policies and procedures for Paralympic classification that should be common to all sports and to the Paralympic Games.

Together with the Code, the IPC also invited feedback on the revised International Standards, which provide the technical and operational requirements for classification across Paralympic sports, and have been modified to reflect changes in the Code.

During the first round of consultation over 750 submissions were received from 32 members of the global Paralympic family on the 2007 version of the Code.

A first draft of the 2017 Code and International Standards was then published, which attracted approximately 1,700 amendments from over 50 Members, other organisations and individuals.

The IPC also considered recommendations from the IPC’s Classification Committee, Management Team and Sports Council and the International Federation Heads of Classification and inaugural National Classification Experts meeting in August and September 2014. In addition, feedback was gathered at the IPC Membership Gathering in Berlin, Germany, in October 2014.

The second draft of the 2017 Code was presented to the IPC Governing Board on 31 January 2015 and the IPC are now encouraging feedback from stakeholders by 10 April 2015.

Anne Hart, Chairperson of the IPC Classification Committee said: “I would like to thank the many contributors who took the time to input on the first draft of the 2017 Code. We are getting very close to being able to publish the final draft and are delighted to invite final feedback.

“Amongst the most important changes in the second draft are that the implementation date has been moved to one year later, to 1 January 2018, to give International Federations more time to create sport-specific classification systems after the 2017 Code is published.

“Special attention has also been given to using more accessible language, removing duplication between the Code and the International Standards, use of comments and supporting organisations with intelligence gathering and assessment.

“For the International Standards, a number of changes have been made to the standards on classification personnel and training, national classification, athlete evaluation, eligible impairments, protest and appeals and data protection.

“I would like to emphasise that classification is at the very heart of fair and equal competition in Paralympic sport. I therefore encourage people to engage with us formally for the final time so that we may publish a Code which is stronger and more comprehensive than ever before.”

After the 10 April deadline, the IPC Classification Committee will further refine the draft 2017 Code before the final version is presented to the IPC Governing Board in June 2015. If approved, the 2017 Code will be submitted as a motion to the IPC General Assembly in November 2015.

For the latest updates on the IPC Classification Code Review process and details of how to contribute, please visit: http://www.paralympic.org/Classification/code-review