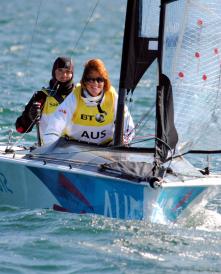 The Paralympic events at the ISAF Sailing World Cup in Miami came to a light win conclusion with no racing possible on the last day.

Fitzgibbon and Tesch put in a strong performance in Miami after the week had started out with a bit of bad luck for the pair when they missed a race due to technical issues with Fitzgibbon’s seat set-up.

But already on day two they took the lead and never handed it back winning with a four-point advantage over their closest rivals Alexandra Rickham and Niki Birrell from Great Britain.

“The start of our week was a bit up and down. We started with a bullet and then suffered some gear failure with my canting seat” Fitzgibbon explained.

“The next two days followed this trend with a good and not so good race, but we got in a couple race wins over the last couple of days. For the upcoming events we will be aiming for a bit more consistency but it’s great to take home another win.”

Tasmanian Matt Bugg finished the event off with a race win yesterday and an overall fifth place in the 2.4mR.