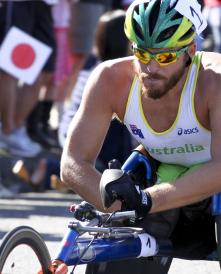 Nine-time champion Kurt Fearnley missed a place on the podium as Japan’s Kota Hokinoue surged to a sensational Oz Day 10k victory in Sydney on Monday.

In rainy, slippery conditions, Hokinoue broke from the pack in the first 500 metres and continually extended his lead over the two laps of The Rocks course in a powerhouse display.

With the chasing pack almost one minute behind, it was Japan’s Sho Watanabe and American Josh George who filled the minor placings with Fearnley well off the pace, finishing in sixth position.

Fearnley won nine Oz Day 10k crowns from 2005 to 2013 and was pushing for his 10th consecutive win last year before he was forced into second place by arch-rival, Great Britain’s David Weir.

But with Weir not travelling down under in 2015, Fearnley held high hopes of regaining his favourite race on home soil until Hokinoue spoilt the party.

Schar, who won last year’s race with a course record time, said her main focus in 2015 was to negotiate the slippery corners without taking any unnecessary risks.

“It was a tough one. The rain made it way harder. You have to be careful around the corners because it was quite slippery but I’m really happy.”

“When I came here, I thought about pushing for the race record but in the rain it wasn’t possible.”