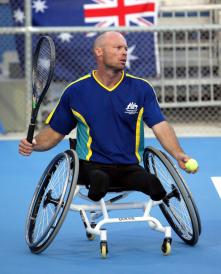 Former wheelchair tennis player David Hall took his place among the pantheon of greats on Monday when he was inducted into the Australian Tennis Hall of Fame.

Hall, 45, was recognised during a special ceremony on court at the Australian Open in Melbourne as he joined Rod Laver, Margaret Court and Ken Rosewall in an illustrious list of inductees.

Former world No 1 Hall is regarded as one of the greatest ever wheelchair players, winning nine Australian Opens, eight US Opens and seven British Opens.

“Privileged is probably the right word,” replied Hall when asked how he felt about becoming a member of this exclusive club.

“Being from Australia, we have such a rich tennis history over the years. Tennis is woven into our national conscience, so for me to be just a little sliver of that is mind-blowing.

“This is something that I never actually dreamed would happen. When I got the phone call from Steve Healy, the president of Tennis Australia, and he said we are going to induct you into the Hall of Fame during the Australian Open, I was just very happy.

“It was something that was unexpected. To have it actually happen is surreal.”

Hall won one gold, three silver and two bronze medals over the course of four Paralympic Games appearances, and for him there was never a better moment in his career than the time he topped the podium after winning the men’s singles in Sydney in 2000.

“To just have that one shot to try to do it at home in the Paralympics, knowing I’ll never get that shot again, that’s what makes it so special,” he said.

“I was blessed to win a lot of tournaments but that’s the one that stands out the most. To be in that moment with the flag being raised and the national anthem being played and 10,000 of your countrymen in the stands cheering, it was emotional.”

Hall retired in 2006 but is still involved in the sport in his role as the Optus Australia Wheelchair Ambassador.

He said: “We go into rehab centres and talk about wheelchair tennis and the benefits that that brings and we work with able-bodied coaches, teaching them the intricacies of wheelchair tennis.

“It’s good to still be involved in the sport. I still enjoy being around.”

Hall’s bronze bust, which will now join the others at Melbourne Park, was unveiled for the first time on Monday and as thousands of tennis fans stood to applaud, he extended an invitation to them all.

Hall said: “Maybe if you’re ever in Garden Square, come over and say hello to me.”