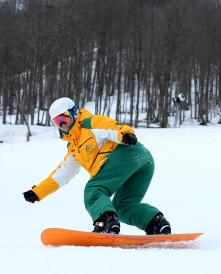 Australian snowboarder Joany Badenhorst is back and determined to show the world what she is capable of, after her Paralympic dreams were shattered just hours before she was due to take to the course at Sochi 2014.

During her warm up, Badenhorst, who has only been snowboarding since 2013, took a turn too hard and crashed, fracturing her knee and hip.

“I had worked so hard for the [previous] five months,” Badenhorst said. “I completely let snowboarding devour my life. I committed to training seven days a week, but I never got to show anyone what I was capable of.

“But at the same time, I’m just really, really lucky, with the nature of my accident, that I didn’t walk away with a broken neck.”

Doctors initially estimated that the she would need 18 months to recover and get back on the snow.

She did not have that much time, particularly with the new season starting in November 2014 and featuring the 2015 IPC Para- Snowboard World Championships from 23-28 February, in La Molina, Spain.

Badenhorst spent every day in the gym rehabbing her knee and hip, and eight months after the accident that ended her season prematurely, she lined up for the first races of the 2014-15 campaign in the debut of banked slalom in Landgraaf, the Netherlands.

“I’ve got most of my function back in my knee, and my hip is working,” she said. “Obviously there are a couple of kinks that I need to work out, but I’m basically back to normal.”

“I definitely have something to show now,” the 20-year-old, who lost her leg in a farm accident aged 10, continued. “Everyone remembers the crash at Sochi and me not competing and that’s something that needs to change. I want to show everyone what I’m capable of, regardless of my injury.”

In this young season, Badenhorst, who previously competed in athletics and just missed a spot at London 2012, is already demonstrating her capabilities in the women’s SB-LL2 classification. She snagged a silver medal in the debut of banked slalom in Landgraaf and placed third in a Europa Cup event at the same venue.

Badenhorst is now set to line-up at the World Cup in Aspen, USA, from Sunday (11 January), for the debut of a new format for snowboard-cross, which will see riders race head-to-head after qualification.

She is also toying with the idea that a successful season will catch the eye of producers from the hit television show ‘Dancing with the Stars’. The former dancer hopes to emulate Amy Purdy, who finished as runner-up on the American version earlier this year.

“I’m about to bribe people here in Australia to get me on ‘Dancing with the Stars’,” Badenhorst quipped. “Since I was a little girl with two legs, that was the standard for me. For a while after I lost my leg, I didn’t think that was plausible.

“But after watching Amy and after watching a couple other athletes on ‘Dancing with the Stars’, I have a renewed hope and, hopefully if I do well enough, Australia will recognise me and allow me on the show – without me having to force my way on it.”

La Molina 2015 will feature around 80 athletes from 20 countries competing in both upper and lower-limb impairment groups in banked slalom and cross events.