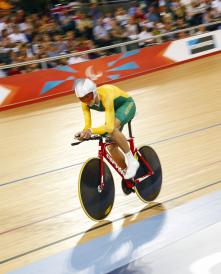 The lead changed three times in the four kilometre C5 event, with Donohoe setting out to a fast start before Gallagher clawed his way back to lead by almost a second with two laps remaining.

However Donohoe appeared to have more left in the tank, hitting back to clinch the lead with one lap to go, crossing the line 1.03 seconds ahead of his opponent.

“The fact Michael looked like he comfortably beat me in qualifying gave me a lot of nerves going into the final,” said Donohoe who was awarded Cycling Australia elite Para-cyclist of the year award.

“In the end, I just sort of listened to the commentator it was so loud and so clear. I went into the last lap and heard I was 0.7 of a second up, I did a few extra pedal strokes and that got me over the line.”

The result is Donohoe’s second gold medal in as many events.

On a day where the rainbow jerseys lit up the velodrome, C4 individual pursuit world champion Sue Powell (ACT) continued her unbeaten run on Australian soil in the event, posting a time of four minutes and nine seconds, 6.06 seconds ahead of silver medalist Alex Green (NSW).

”I am pretty happy. I didn’t really expect it today, but I managed to pull it out,” said Powell.

“It puts a fair bit of pressure on me going out in the rainbow jersey, and being unbeaten in Australia as well. I do put pressure on myself, so it’s really relieving to win today.”

In the tandem pursuit events, it was the world champion duo of Matt Formston (NSW) and pilot Michael Curran (NSW) who shone, easily notching up their second national title for the week after catching Bryce Lindores (QLD) and pilot Mark Jamieson(TAS).

“We’re very happy,” Michael said. “It’s been a big three weeks, so we’re very happy to get another national title and wearing the rainbow jersey makes it even better. We are wrapped.

“It’s so good seeing so many teams here from all the different states. We’ve got everyone here. It’s unreal for cycling and para-cycling.”

”I’ve been training really hard for the pursuit,” said Kennedy who earned bronze in the event at the Para-cycling Track World Championships, but spent the majority of 2014 off the bike due to illness. “The look on my face says it all, I’m really happy about it.

“It’s good to be out racing again. I did a personal best last week (in New Zealand) where I knocked about two seconds off my best so it’s good to do a similar time.”

”I was a little bit nervous coming in, because nationals are always tough, but I’m absolutely stoked,” said Falconer. “My coach has been focusing on the pursuit for these nationals, so that was my main aim.”

In the C4 event, Benjamin Swain (NSW) claimed gold ahead of Ben Ellen (QLD) in their four kilometre event.

The action continues for the Para-cyclists on Friday evening with the the sprint finals.