Australia’s youngest Paralympian to make his mark at Winter XGames 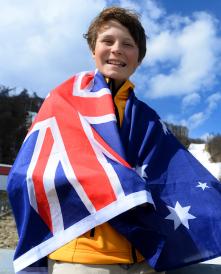 15-year-old Ben Tudhope will make history twice when he becomes the first Australian Paralympian and the youngest ever Australian to participate in one of the world’s most prestigious action sports events next month, the Winter XGames.

Taking place in Aspen, Colorado the event will see more than 200 of the most highly recognised winter athletes compete for some of the most coveted medals in extreme winter sport, and for the first time, Snowboard X Adaptive will be included as a medal event.

To be selected as one of only twelve athletes to compete in the discipline is a huge honour, said Tudhope.

“It is a privilege to be the first ever Australian Paralympian to go to XGames, and to be there with some A-list Aussie athletes like Scotty James and Torah Bright is quite cool.”

“I loved watching XGames when I first started snowboarding. I admired every athlete, and now a few years later, I get to go. I feel like a kid in a massive lolly shop. I’m so excited!”

Tudhope, who wowed fans at the Sochi 2014 Paralympic Games with his top 10 finish, was born with cerebral palsy that caused a partial paralysis on the left side of his body. For the adaptive discipline to be put on par with its able-bodied counterparts is a huge milestone for the sport, he says.

“XGames for snowboarders is almost as big as the Olympics, so there will be a lot of fans watching and more watching on TV.”

“People will start remembering the big guys in our sport, like Mike Shea and Evan Strong, which will be great for the Paralympic movement,” he continued.

“Our sport is already going in the right direction, but hopefully this will push more and more people with disabilities to pursue winter sport – in Australia and overseas. One day more people can see themselves where I am today.”

The course will be 2,900 foot long (884m), with an average slope of 15 per cent and 475 feet (145m) of vertical drop. While that is extreme to even the most experienced snowboarders, the competition in sight doesn’t faze Tudhope in the slightest.

“Because this will be my first time at XGames and because I’m so young, it’s all about the experience for me. I just want to enjoy it,” Tudhope said.

“I’m not putting any pressure on myself, but I am hoping that our sport will have its next stage of growth from getting more exposure all over the world.”