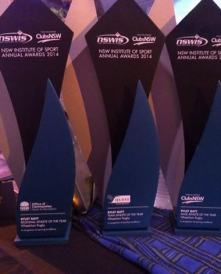 Three-time Paralympian and wheelchair rugby star Ryley Batt enjoyed a night to remember at the New South Wales Institute of Sport Awards last night in Sydney, taking home not one, but three awards.

And in another coup for Paralympic movement, Australian men’s Wheelchair Basketball Coach Ben Ettridge was announced as the NSWIS Coach of the Year.

Batt’s awards, which recognise his sensational year with the Steelers, are not only a testament to his athletic career but to his impact on raising the profile of Paralympic sport in Australia.

Kurt Fearnley (2009) was the last Paralympian to win the NSWIS Male Athlete of the Year prize.

“I honestly didn’t think I’d take home any awards given the talent sitting beside me in the room last night, but to win three as a Paralympic athlete is phenomenal,” Batt said.

“I’ve won Team Athlete of the Year before, in 2012, but winning the big one means a lot. It’s great to get the recognition as a Paralympic athlete and it means a lot to the Paralympic community.”

2014 saw the Port Macquarie based athlete lead the Australian wheelchair rugby team, the Steelers, to victory at the IWRF World Championships in Odense, Denmark. Batt scored 45 goals in the gold medal match against Canada, and his contributions to the team allowed Australia to become only the second nation to hold the world and Paralympic titles at the same time. It was also Australia’s first ever world championship victory in the sport.

“I’m so incredibly happy with how far the Steelers came this year. It was great to be able to achieve such a high status, and I’m honoured to have been part of this team,” Batt said.

Looking back at his sporting career, Batt says he is proud to have been able to make such an impact in sport and within his community.

“I’m so happy with my life and not only because of these awards. Through wheelchair rugby, I have been able to travel the world, meet incredible people and won world championship and Paralympic gold medals.”

“As a kid I couldn’t see ahead the opportunities that not having legs would give me, but I wouldn’t trade it for the world,” Batt said.

“I’ve been playing wheelchair rugby for 10 years, and I can’t wait to see where it takes me in the next 10.”