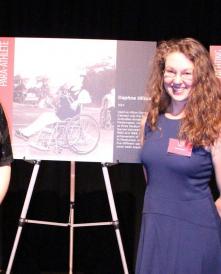 NSW Minister for Sport and Recreation Stuart Ayres honoured some of the country’s most accomplished and respected athletes, including Paralympic greats Daphne Hilton and Troy Sachs with their induction into the NSW Hall of Champions.

The NSW Hall of Champions is the home of a unique memorial and museum honouring more than 350 of the State’s finest able-bodied and Para-athletes across 50 sports.

“Today, I am honoured to induct these six accomplished athletes, who have excelled at the highest levels of their chosen sport, into the NSW Hall of Champions,” Minister Ayres said.

“Their induction is a public recording and celebration of their representation of our great state, furthermore our country, their contributions to sport and importantly their achievements.”

The NSW Hall of Champions consists of a ‘Wall of Fame’ displaying photographs from over 350 athletes depicting many memorable moments. A museum with a nationally significant collection of over 2,000 sporting artefacts forms part of the Hall of Champions.

“Each year the Sports Centre welcomes over 300,000 visitors who can walk through this corridor of sports memories and milestones,” Minister Ayres said. “They can take a moment to see and learn about what these greats have achieved, and in turn dream big for their own sports ambitions.”