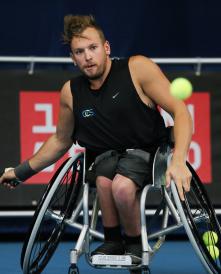 In a repeat of his British Open success in the city earlier this year, the former Paralympic basketball gold medallist beat world number two Andy Lapthorne in straight sets in the final at Nottingham Tennis Centre.

“That is probably the best tennis I’ve ever played,” Alcott said.

“Andy played awesome in the first set, I was under the pump and it could easily have been 4-4 because he was causing me a lot of trouble.

“I went on to run away with it in the second set, but some of the 20-shot rallies we had out there was like nothing I’ve been part of before.”

Alcott’s ITF Series 1 tournament triumph in the United Kingdom marks an impressive return to action, having spent the previous 10-weeks on the training court following his Belgium Open win in July.

With wins over Masters-bound Lapthorne and Lucas Sithole in successive days, Alcott got the confidence boost he was looking for en route to London.

“I’m stoked to get a win like this leading into the Masters, but if I don’t win next week then this victory doesn’t really count for much,” Alcott said.

“Next week is really the big dog for me, so I’m looking to continue the way I’ve been playing here in Nottingham.”

The Australian failed to add to his singles success later in the day as he and Briton Antony Cotterill were beaten by top seeds Lapthorne and Jamie Burdekin 6-4 1-6 7-6(2) in the doubles final.

Alcott is one of the world’s top four quad players to qualify for the NEC Wheelchair Tennis Masters starting at Queen Elizabeth Olympic Park on Wednesday, 26 November.