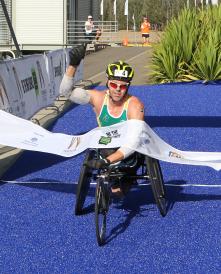 A star-studded line up of Paralympians and a record number of Paralympic hopefuls will race this weekend at the second annual Australian Paratriathlon Championships.

Held in conjunction with the Oceania Paratriathlon Championships and the Australian Junior Triathlon Series at the International Regatta Centre in Penrith, a record 30 Paratriathletes will take part in the event including reigning four time world champion Bill Chaffey, and six Australian Paralympians including London silver medallist Erik Horrie.

Paratriathlon will make its Paralympic debut in Rio 2016 and with the Games fast approaching; the sport has seen a spike in interest and athletes taking part, with 12 more competing at the national championships than at the inaugural race this time last year.

2013 world champion Bill Chaffey will again take to the 750m swim, 20km cycle and 5km run/push for what he hopes will be his second straight national title but will face a field of seven other competitors including Paralympic rower and current rowing world champion in the men’s arm only singles class, Erik Horrie, who finished third in last year’s race just months after the London Paralympic Games.

Aspiring Paratriathlete and reigning national champion Jonathan Goerlach, who finished sixth at the 2013 World Championships in London, will have his work cut out for him in the swim leg with three-time Paralympic swimmer Jeremy McClure lining up for his first race, as well as in the 5km run with Paralympic marathon medallist Roy Daniell also in the mix in the vision-impaired class.

Racing begins at 7:00am on Sunday 12th January at the International Regatta Centre in Penrith. Entry is free. Click here for more information.