Paralympians encourage youths to ‘get involved’ in time for Rio 2016 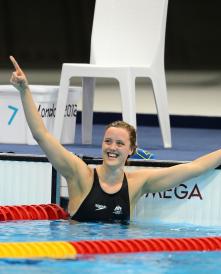 Paralympic champions Angela Ballard and Ellie Cole are encouraging youths with a disability to ‘Get Involved’ in a Paralympic sport through a new initiative that aims to establish a new generation of Para-sport participants.

The ‘Get Involved’ program was created after the Australian Paralympic Committee (APC) received new funding from the Coca-Cola Australia Foundation. It plans to help young Australians with a disability try a Paralympic sport in a safe environment and provide an opportunity for them to further develop their potential.

People with a disability are 15% less likely to participate in sport and active recreation than the general population , with nearly 75% of those currently participating wanting to be more involved than they already are. This is largely due to a number of constraints such as the lack of facilities offering specialised sports and a lack of self-confidence to take part.

By tackling these issues, ‘Get Involved’ will empower youths with a disability to participate in sport and ultimately grow their activity levels  .

With the 2016 Paralympic Games in Rio less than two years away, the APC hopes that the initiative will inspire teens with a disability to try Para-sports whether they have Paralympic Games dreams or want to attend for fun. Para-sports on offer include Para-swimming, boccia, Para-table tennis, wheelchair basketball, Para-cycling, Para-athletics and goalball.

Wheelchair racer Angela Ballard said: “The ‘Get Involved’ days are a perfect way for teens with a disability to give a new sport a go and make new friends. It’s exciting to think that the events give teens the opportunity to see if they could potentially aim for Rio. Even if their sights aren’t set on a Paralympic sporting career, it’s still awesome for teens to come along and enjoy sport.”

Jason Hellwig, Chief Executive Officer of the Australian Paralympic Committee said: “The Australian Paralympic Committee strongly believes in the power of sport for individuals with a disability, especially young people. Paralympic sport can provide huge positive physical and social benefits and together with the Coca-Cola Australia Foundation, we aim to inspire more young people to participate and encourage them to take it as far as their talent and desire possibly can.”

‘Get Involved’ events will be held at local sport clubs around the state, and youths who attend can receive both group and one-on-one coaching in their chosen sport, as well as ongoing support from their local sport club.