Wheelchair racer Richard Colman back in action for the Sydney Marathon 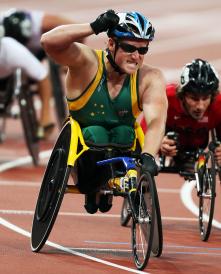 London gold medallist Richard Colman will be taking on his first race since the Glasgow 2014 Commonwealth Games when he enters the Sydney Marathon this Sunday.

Having landed back in Australia last week after a two week stint in South America, Colman is using the Sydney Marathon as a way to build back up to full training.

“I’ve signed up for a few marathons in the next few months so my aim is to be fit for them, before giving it my all at the World Championships in November 2015,” said Colman.

This is the first time Colman will take part in the Sydney Marathon, and will compete against fellow Paralympian Kurt Fearnley, who has won multiple titles in this race.

“I’m not sure how I will go or what to expect but I do know it is a hard course, and there are lots of hills and corners, so the 42km will be a tough slog,”

“Kurt will win. He is unbeatable on this home course. I’m hoping to be alongside him at some point, but I just hope to finish and push well.” Colman said.

A tough challenge after a two week break some might say, but while in Bolivia, Colman became the first person in a wheelchair to complete the Death Road, a 64km track which descends 3,500m.

“Death Road pushed me to my limits but it was an incredible experience to say the least,” Colman said.

The Sydney Marathon will also be his first for the Spring marathon season, and says that it will give him the motivation to keep training for the next few.

“After Sydney, my focus is the New York Marathon and the Oita Marathon in Japan in November, so this is a good first hit out.”

“Hopefully it will be good weather on Sunday morning, and I can get out there amongst all of the other participants and have a good race,” Colman said.