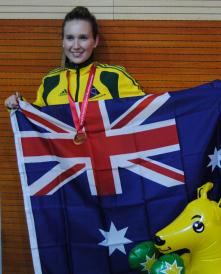 24-year-old Tapper won bronze in Beijing, to follow on from the bronze she won in the team’s event at the Glasgow Commonwealth Games.

“It’s my first major medal, so I’m pretty stoked with that,” Tapper said.

“And they said this is the first medal Australia has won at a World Championships, so I can’t complain about that.”

“I’m stoked to get up on that podium, but there’s still plenty of work to be done. We want gold, so that’s what I’ve got to aim for.

“I had a really tough run in the group stage,” she said.

“I was quite happy I got through because I had a really good chance of not getting through at all.”

Tapper said the bronze medal is a nice reward for a really busy 2014.

“I was feeling a little bit fatigued, but not much. I looked after myself pretty well when I was away in Glasgow, and I had a good month at home before now.”

Tapper has set her sights on competing in both the able-bodied Olympics and the Paralympics in Rio in 2016, and says her results this year show it can be done.

“I think they complement one another, and the more international exposure I get is only going to help me,” she said.

Photo with thanks to Table Tennis Australia