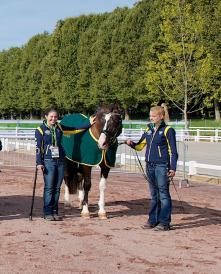 Australia’s Para-equestrians concluded their World Equestrian Games campaign on Friday declaring their intention to come back bigger and better in Rio.

It was the first World Equestrian Games for all four members of the Australian team and their efforts over the five days of competition helped to book the Aussies a place at the Rio 2016 Paralympic Games.

Leading into the Games, it was the goal of Australia’s Para-equestrian program to return home with a medal and despite not achieving a podium finish there are a number of positives to come out of the campaign.

National Performance Director for Para-equestrian Julia Battams, said the program would be assessed once the team had returned home.

“There will be an opportunity for reflection on the team’s performance when the Games are over but now is the time to celebrate the efforts of our riders and their achievements.

“A key goal coming out of WEG was to qualify a team for Rio 2016 and we’re pleased to say this team has achieved that.

“We saw Joann and Nicole qualify for the Freestyle and both Lizzie and Chelsea also finish in the top ten of their division.

“Nicole, Lizzie and Chelsea are some of the youngest athletes to represent Australia at major international championships in Para-Equestrian and this campaign has been a great learning experience for them. The lessons they have learnt on this tour will help them to be even more competitive in the future,” Battams said.

The final day of Para-Equestrian competition was an emotional day for the Australian team with Paralympic gold medal winning horse Worldwide PB giving his final performance in the Grade Ib Freestyle.

It was a fitting retirement for the 20 year old who famously won gold at the London 2012 Paralympic Games with his rider Joann Formosa and the pair scored 67.0 which saw them finish in 9th position.

“He’s getting on in age and he was a bit tired today. Every ride with him is a good one so I can’t complain. I love him to bits.”

“We’re stronger as a team. We’re all there for each other. We’ve got eachother’s backs. We go through the highs and lows with each other, we support each other and we help each other out.

“Before we left I had plenty of time living with the others in a squad environment. We’ve trained together and I actually feel part of a team.”

Aussie riders return home on Sunday with the horses to follow in late September.

Photo with thanks to John Lechner Photography