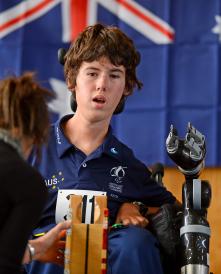 Australia’s success at the 2014 BISFED World Championships in Beijing, China will play a key role in Australia qualifying Boccia athletes for the Rio 2016 Paralympic Games.

Two of Australia’s best boccia athletes have been invited to participate in the world event based on 2013 results, giving them a better opportunity to climb up the world rankings and secure a spot for Rio.

Daniel Michel (BC3 class) and Jason Mayweather (BC2) class will be competing at World Championship level for the first time, and with the help of the Australian Paralympic Committee (APC) and Head Coach Peter King, both athletes have fast-tracked to become leading boccia athletes.

“Both boys have potential to go far in boccia. Both only made their debut in an international competition last year, so we have high hopes for them,” King said.

“This event is a great opportunity Dan and Jason, not only in the qualification process for the next Games, but to test themselves against some of the world’s best outside of home soil,” King said.

Michel is currently ranked at 35th in the world, and Mayweather at 43rd in his class, and King said as a World Championships competition, it’s important that they both do excel and earn the points required to push up their world rankings.

“Points awarded at World Championships are worth more than at other comps, so as long as they both do well, there is no reason why they won’t be competing at Rio.”

“We’ve worked hard to best prepare both Jason and Dan for this level of competition, and I know they have the potential to make it to the top of their classifications and get Australia back into the Paralympic Games,” King said.

Australia has not had boccia representatives compete at the Paralympic Games since Sydney 2000, just one of the reasons why the APC has invested significantly into the sport.

Since building better pathways and programs for boccia, the APC has seen participation levels increase which in turn has allowed for the provision of dedicated coaches and staff to work alongside athletes.

There are only seven Paralympic medals available in boccia, so success on an international scale means that targets under Australia’s Winning Edge High Performance strategy can be met, and more opportunities will become available for the sport.

While King is confident that both athletes will help Australia break back into Paralympic competition and progress the sport across the country, they will face challenges as they compete on the world stage in China.

“This is a tough competition. The boys are up against the best players in the world and they have had limited international travel experience,” King said.

“Both Jason and Dan have improved significantly in the last two years, and what matters most is that they give it their all. I look forward to seeing the results.”

Held from 1-28 September, the BISFED World Championships will be the largest Boccia competition ever held and will see more than 180 athletes from 30 countries participate.