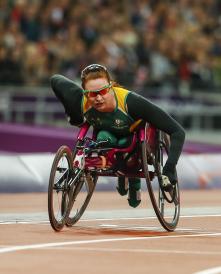 Ballard surged to victory in the women’s T54 1500m final, while team-mate Kurt Fearnley (NSW) added a silver in the men’s T54 1500m event on Day Five of competition.

In heavy rain not conducive to wheelchair racing, Ballard shot past a tiring Diane Roy of Canada on the home straight to break the line and add Commonwealth gold to her three IPC World Championship titles.  Ballard clocked 3:59.20 to finish ahead of the Canadian in 3:59.55.

“It worked out perfectly for me,” said Ballard.  “Midway through the race I was boxed in and I didn’t think that was a great part of the plan.  I didn’t intend that to happen, but because of the wet weather and the varying degrees which people push well, it worked for me because it spread the field out and I was no longer boxed and was able to come around.

Ballard said the wet conditions played a huge part in the race and influenced her preparation for it.

“This is so awesome. It was a mess tonight and it was a really good to make it through cleanly,” Ballad told Network 10 after the race.

Christie Dawes (NSW) was also in the women’s T54 wheelchair final and she clocked 4:03.43 as she finished in fourth place.

The excitement of Ballard’s win had barely settled down when Fearnley took to the track in the men’s T54 1500m final.  Fearnley led early before his rival David Weir of England moved past him on the final lap in the back straight.  Fearnley tried desperately to go with Weir but he couldn’t bridge the gap and the Englishman took the gold in 3:21.67 with Fearnley taking silver in 3:23.08.

Fearnley said afterwards it had been an emotional race for him.

“Your initial moment is disappointment,” said Fearnley after the race.  “You never line up there to shoot for second place.  You convince yourself in the days leading up, in the minutes leading up, that you are worthy. That you are worthy to race in the green and gold. That you’re going to battle for it fiercely.

“Part of the thing that I absolutely love about it is those minutes leading up to it where everything in your head is saying you will win this. This is what I’m here for.  And I think it was a bit more emotional tonight knowing that it was one of those last few times when I get that emotion and get that feeling because it is a hell of a thing. Like, it’s just why we do what we do and then when you cross that finish line, you know, you deal with what happens after that. Sometimes there is some disappointment.”

Stay connected with the Australian athletics team by interacting with the Commonwealth Games Event Hub on athletics.com.au, or by joining the conversation on Twitter by following @AthsAust and using the hashtag #Glasgow2014.

For more information on the Commonwealth Games, including the competition schedule, please click here to visit the Glasgow 2014 website.