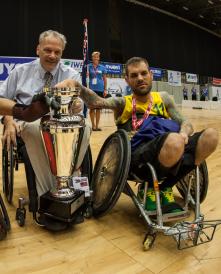 The Australian Steelers have won the gold medal at the 2014 IWRF Wheelchair Rugby World Championships, defeating Canada 67-56 in the final overnight in Odense, Denmark.

Such a rare achievement is why Australian coach Brad Dubberley said he could not be prouder of his team.

“I’m so proud of our whole team. Not just the athletes, but all the support staff.

“It’s a huge accomplishment. We’re really enjoying our success and we’re going to celebrate being world champions here. But as soon as we get home, it’s going to be all systems go for the Paralympics. I think there is still a lot of room for improvement before we get to Rio.”

In a brutal match fitting of a world championship final, Australia were shocked and outmuscled in the early exchanges by a Canadian team still riding a wave of momentum following their semi-final win over the world number one, Team USA.

After the scores were locked at 15-all at quarter-time, the two teams continued to trade goals until Australia were able to gain the ascendancy late in the third quarter. With Canada having used all of their time-outs, the Australians stepped up a gear and converted pressure into crucial goals.

With Ryley Batt and Chris Bond leading the offence, the Steelers took a 48-40 lead into three quarter time and never looked back.

Australian captain Ryan Scott, appearing at his fourth world championships, said the feeling of finally winning one after 12 years of trying was hard to describe.

He said it was extra sweet in 2014, after the Australians were thrashed by the United States in the gold medal match of the 2010 world championships in Vancouver, Canada.

“It feels amazing. This is everything that we wanted. I’m finding hard to put it into words,” Scott said.

“Canada came out as we predicted. They were very tactical and very strong.

“We just needed to stay patient, not worry about what the score said and just keep at them.

“When you have Ryley and Chris around, they just cause teams to panic and that is what happened.”

Batt finished with 45 goals while Bond (19 goals) and Jayden Warn (3 goals) were the other goal scorers for Australia.

And although they didn’t contribute to the scoreboard, veterans Naz Erdem and the Australian captain were pivotal tothe Steeler’s victory. Their work off the ball continually thwarted the Canadians.

“I’m lucky because I have such a great team to work with. To be honest, it is an easy job to captain this team,” Scott said.

“But to be captain of the greatest country in the world is a huge honour.

“I’ve played with a few of these guys for over 10 years and to do with them and the rest of the group is unbelievable. We’re going to celebrate accordingly.”

Earlier, the United States defeated Japan 62-56 in the bronze medal match. It was little consolation for the Americans though, who lost their world number one ranking and failed to play in the gold medal match for the first time ever at a World Championships.