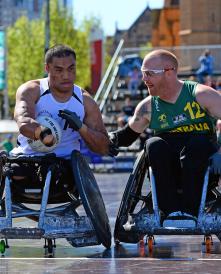 The Australian Steelers will travel to New Zealand this week to put the finishing touches on their preparation for next month’s World Wheelchair Rugby Championships in Denmark.

The Steelers will clash with the New Zealand Wheel Blacks on Friday in Auckland, before the extended Australian squad will split into two teams to contest the New Zealand National Championships on Saturday and Sunday.

Australian coach Brad Dubberley has already named the Australian team for Denmark and will field a similar side to tackle the Kiwis on Friday. And then, the focus will be to test different line-ups and to provide more experience for the rising stars when the extended squad is split in two over the course of the weekend.

Boasting Paralympic gold medallists in both teams, the presence of the Aussies will ensure a torrid time for the four Kiwi sides (Waikato, Auckland Blue, Auckland White and Canterbury) all pushing to secure the national title.

For the Green team, Josh Hose and Matt Lewis will shoulder the high-pointer duties and will be looking for support from  Cody Meakin, Andrew Edmondson, Jason Ellery, Jason Lees, Naz Erdem, and Michael Ozanne in the absence of Ryley Batt, who was a late withdrawal due to illness.

While in New Zealand, the Australians will help international wheelchair rugby make its returns to New Zealand after five years.

Having slipped from Paralympic gold medallists in 2004, to 10th currently, Friday’s match will be an opportunity for the Wheel Blacks to continue on the form they showed at last month’s Canada Cup, where they finished fifth.

New Zealand coach Peter Martin felt the match wouldn’t be without passion and sting, after all it is an international clash.

“We’ve seen them, we know what they can do, and we have got to reassert ourselves with what we’re trying to do in certain line ups – and if we do that, we have good opportunity to steal a win,” Martin said.

While an annual test series is still being negotiated, Martin hopes Friday’s match is essentially the start of many more clashes between the nations in the lead-up to the Rio Paralympic Games in 2016.